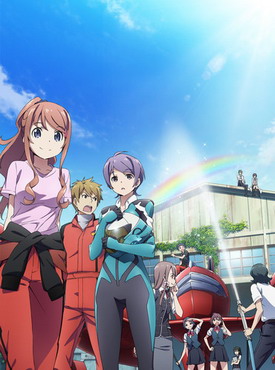 Classroom Crisis is set in a future where space travel is possible and a corporation named Kirishina has set up an academy on Mars for talented students who work on developing rocket engines. They have to be high school students but also rocket engineers. The students will come across regular teen issues and also dealing with the higher ups at Kirishina.

The characters is where this show falls apart. Most shows are driven by characters more than plotlines and this is one of those that needed characters that you might care about. None of these characters are particularly engaging or keep you interested. Maybe you would have had that if the show was longer because they didn’t have the time to really get into their character plus have a plot and other things leading up to it since this show is a little more involved than most simple one cour shows.

As far as production value, the show was decent. The music, art and plot were decent but nothing extraordinary. The plotline was good but the way they went about it seemed a bit haphazard to me. This is the problem you have when you don’t have enough episodes to tell a full story though. They tried to add a lot on intrigue while maintaining the high school feel and that may have been too much for 13 episodes or maybe they needed to eliminate some of the background but then you lose something from what they were able to put into the show. It’s a double edged knife.

The show was okay I guess. The reason it took me so long to get this finished is because there wasn’t much for me to day about it. It has sat in my draft folder since the show ended. It’s an okay show but nothing ground breaking.