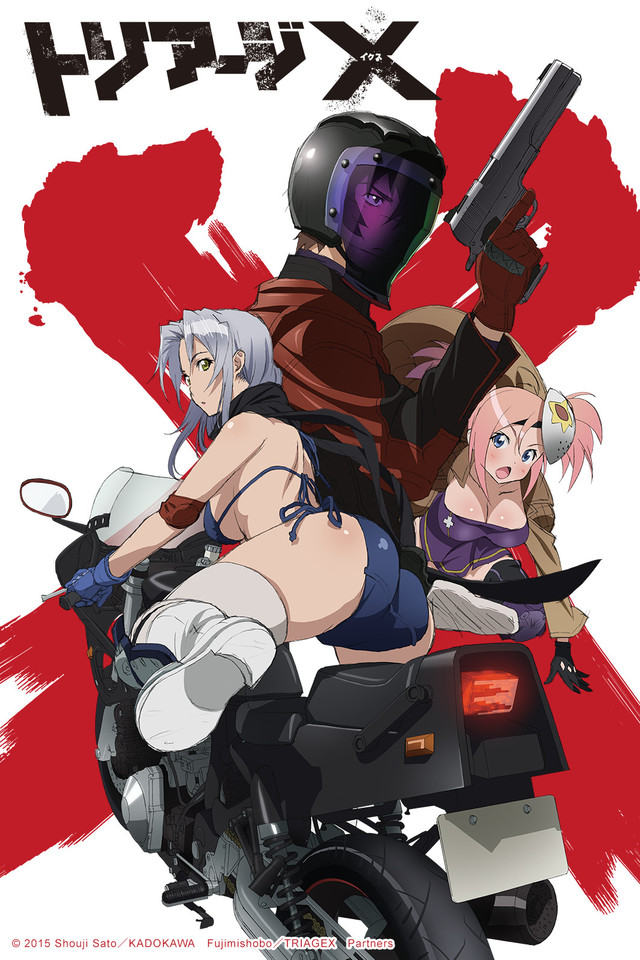 It’s time for my first Spring 2015 review. Triage X was only 10 episodes so the show is over and we don’t know if there will be a season 2. They didn’t have a distributor when the season started so it is possible but most 10 show animes don’t get a second season.

Triage X was one I picked because the premise was kind of interesting. I don’t mind ecchi anymore because I got used to it. It’s part of Japanese culture and most action shows now go with ecchi because the production committees are afraid of an all action show. Hopefully shows like Parasyte and World Trigger will dispel that notion.

Anyway, on with the review. Triage X is about a group of vigilantes, made up of a medical staff and local teenagers from the nearby high school. It makes for a weird cast of characters. Can you see a pop star as a vigilante? Yeah, I can’t either. Their mission is to kill off undesirable people who are labeled cancers of society or black labels. Their job is to stop “the infection” into society and kill anyone who is black labeled.

The art is where this show draws it’s most criticism and that’s because the women. The show is ecchi so of course sometimes they will be without a lot of clothing. The show has women with large breasts, now that would be fine but someone with an artistic eye will notice all the flaws in design. It’s like every scene they’re shaped differently or not drawn as they should be. Yeah anyway, there are a few scenes which are pushing the border of going into hentai but they don’t go there. But the music, plot and all that are there and they do a decent job with those.

I’m definitely not feeling the ending. The last episode in general was a wrap up episode but it felt forced and contrived. The first 1/2 is a hot springs thing which again is a cultural thing. It wasn’t too bad but it’s just the women of the group talking. Then the other half was a mission with an ending that… ha, had to edit out the ending. Sorry bout that, I almost gave it away. But as usual they gave the potential for a season 2.

I’m giving Triage a 3.4, it’s better than average but has a way to go to be one I can recommend.