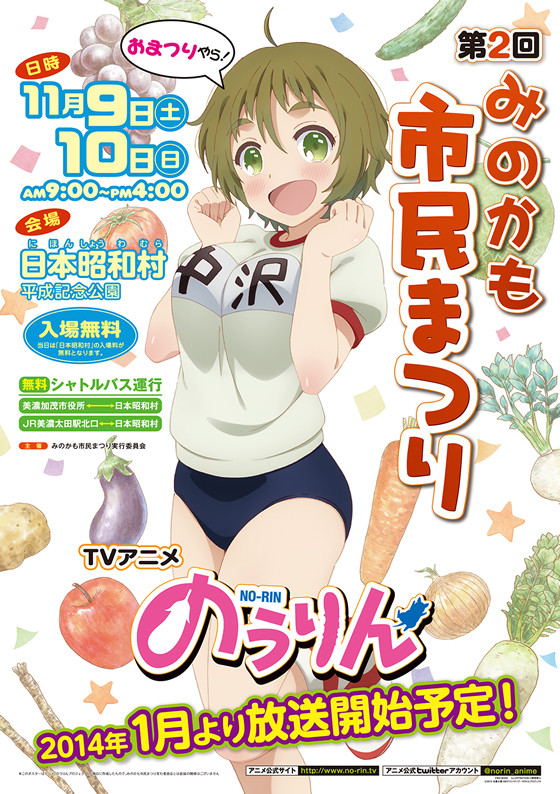 No-Rin is an anime about farming but from a comedic standpoint with some ecchiness thrown in. Do you learn anything about farming? Maybe a little. The show starts out with a pop star who gives up the lifestyle which devastates Hata Kosaku, a student at an agricultural school. Little did he know that she would end up at that same school under a false name.

Hata Kosaku is the main character, he’s your average perverted high school student. He has his sweet childhood friend there with him, who’s in love with him and he doesn’t even know it. Another male character who seems to like to strip. A female who is one of the top students in the school who they call “Boobs” for VERY obvious reasons, she is in charge of livestock including a rampaging bull. Then you have the pop star who has never experienced country life. So the cast of characters ends up being a cross section of culture but they kind of work well together.

The production value of the show is pretty good, can’t fault them there but there isn’t that much else to the show. There were a few different ending sequences to the show so they did put thought into it. The dub reminds me of Baka and Test, a lot. There are some changes made and it has almost the same feel.

It’s a decent show, not great, not bad but nothing spectacular. it’s kind of like Rail Wars! in that way. They took a serious industry which is being neglected and made it somewhat watchable. If you have the time then watch it, otherwise you can bypass it without feeling like you missed something.