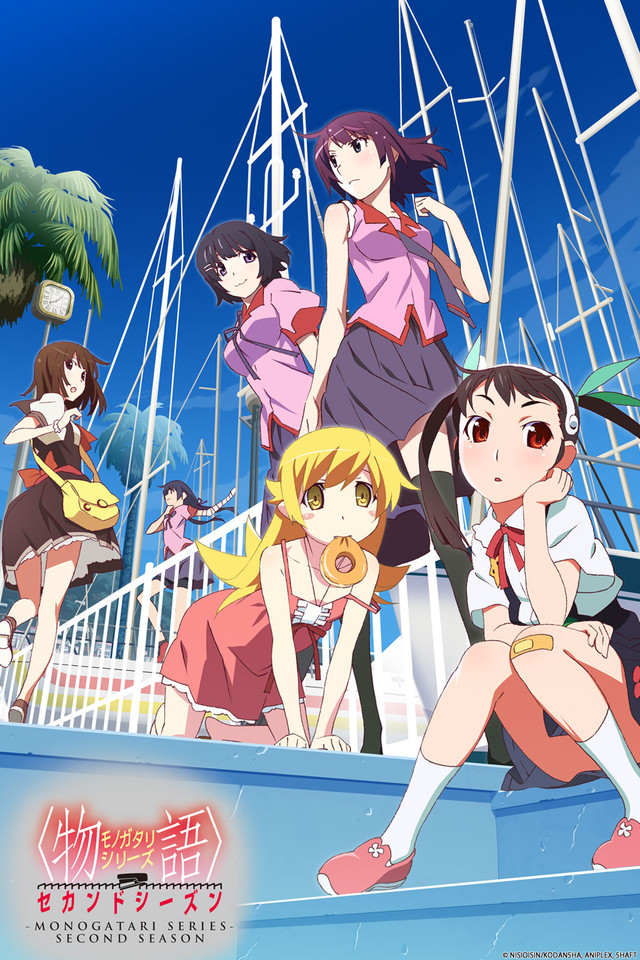 Monogatari is back with a second season. (Yeah, like I didn’t watch the shows back to back.) Koyomi and the crew are back with a lot more occult detective work, adult type scenes, avant garde style, long soliloques, confessions and everything that makes this show so damned appealing.

This second season started off kind of awkwardly with the two main talkers in the series being put together, Hanekawa and Hitagi. Grab your remote control if you don’t know Japanese because you will need it to keep up with them but it is an interesting setup for the season. The second season has a much darker tone to it, you even lose at least one of the main characters. The story pacing is slowed down a bit and there are even 2 recap episodes included to keep everyone on track. As you know I’m not a plot killer, I prefer to give you what amounts to a preview and let you make the decision from there but if you liked the first 3 series then I think you’ll like this.

When I say everyone is back that also includes Kaiki, Mayoi, and everyone’s favorite neko, Black Tsubasa.

One thing I can say I don’t miss is Koyomi’s incest moments and loli pervertness but if people didn’t like that stuff then it wouldn’t be there. But damn…come on man, you’re surrounded by older girls who you know, LOOK LIKE WOMEN. What’s with the loli stuff. Sorry, personal rant over.

This show seems like it will never lack in the art department or music and sound. Those qualities look like they will always remain top notch. Some shows try to get cute and make wholesale changes for the sake of changing and I’m glad they didn’t do that here. Though there is less of the abstract work.

I read some other reviews and it seems some people don’t like the changes that were made to the show. But with all the characters established, you can start expanding their stories more and not be all about introductions. To me, it was a natural progression and done right. I still recommend the series in it’s entirety.