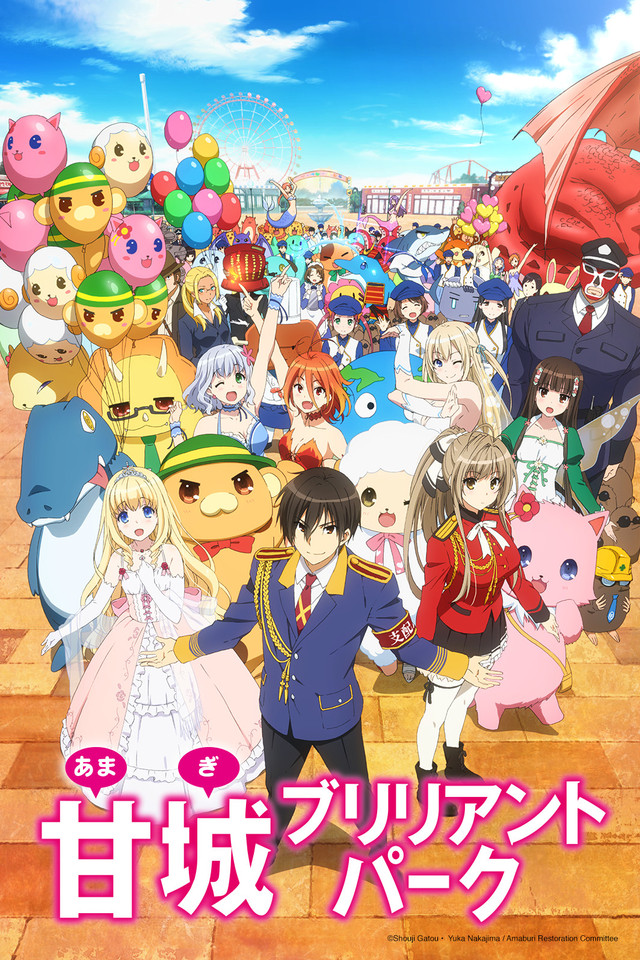 Amagi Brilliant Park is one I’ve been waiting for, I just didn’t expect it on Crunchyroll. Right from the beginning you’re thrown into what looks like it’ll be a fun ride. Your opening scene is a high school guy up against a wall with a pretty girl pointing a musket at him and asking him out to an amusement park.

This isn’t your ordinary amusement park that she asked him to go to. It’s actually the worst one in Japan. Yes, she invited him to the worse amusement park in Japan. That’s where the adventure begins for Kanie, who finds himself in the middle of something much much bigger than a simple date to an amusement park.

These type of shows are driven by characters and the characters shine here. The main protagonist is Kanie Seiya and the girl with the musket is Sento Isuzu. Do the names look familiar? Look closely. Kanye and 50 Cent. They aren’t the only ones that are an ode to hip hop icons. The general manager of the park is Fleuranza Latifah (Queen Latifah). All of the characters actually have very specific backgrounds which do get covered in the first few episodes.

Some of the side characters like Moffle will look familiar to some of you but he is no Bonta-kun. He does still kick some ass though. That’s only a few of the big cast of side characters. I don’t know how they managed to do it but even with all the characters you don’t feel overwhelmed or that they missed including someone like you do in most other shows with a lot of characters and only 13 episodes to show them off.

This show is bright and colorful as you can tell from the cover pic. Has a nice little story behind and an odd way or going about accomplishing the goal but that’s what makes the show entertaining and fun. I can’t think of one thing I’d point out about the show as being subpar. But I guess that’s to be expected when the director of Full Metal Panic? Fumoffu and The Disappearance of Haruhi Suzumiya is on board.

Comedy is very subjective so what’s funny to one person, may not be funny to another. I haven’t talked to anyone who hasn’t enjoyed Amagi Brilliant Park but if someone doesn’t enjoy it then they probably have no sense of humor. This show is one of the most well done shows in recent times and it gets my 5 star rating. Go watch it. You can thank me later. Thought I will say stay away from episode 13, it’s just filler.