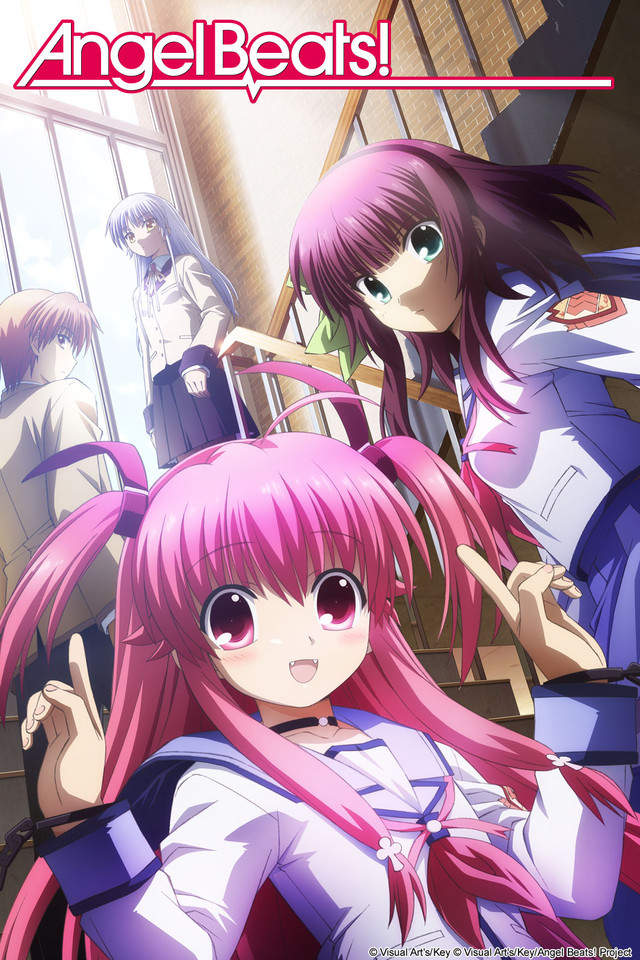 Angel Beats is set in a high school that’s in limbo. The students who inhabit this high school are already dead. They still feel pain as if they were alive. They can also die in this limbo but they awaken with no injuries or memory of what happened.

The story starts with Otanashi who has no memory of what happened to him and he lands right in the middle of a battle. He is greeted by Yurippe, who you would think is Haruhi Suzumiya with an M-16. Her character design is almost exactly the same.

Haruhi has her Brigade and Yurippe has her Battlefront. But the personalities are not the same. Yurippe does have the zany, “let’s do it” attitude but she is more militant. They’re in a battle with the perceived antagonist known as “Angel”. The Afterlife Battlefront is founded to fight “God,” and Otanashi is invited to join them in their battle while he tries to remember how he ended up there.

Otanashi, Hinata and Angel will remind you of Kyon, Koizumi and Nagato but the rest of the cast separates itself from the Haruhi Suzumiya cast. The characters are all done well, even the ones who are dopplegangers, there’s enough there to separate them. You have a guy who is always dancing and speaks in English the few times he does speak, a zealot who thinks he’s God, Hinata who always say things that makes Otanashi say “are you that way?” and several more.

Character designs aside, the show’s art is well done. They paid attention to every detail including the backgrounds. You won’t find yourself looking at a foreground that’s good then the background is a blank slate. I couldn’t find one thing to knock them on. The sound and music is also done just as well. The opening theme is a solemn tune which will make sense when you get into the show and understand what it’s about.

The only issue I have with the show is the usual production committee problem that I have, 13 episodes is just not enough to tell the full story. You get to find out the story behind Otanashi, Yurippe and Yui but everyone else you have to guess or you get one line on why they’re there. When you have a cast as big as this show, you do need a little more time to give their stories since it’s a major part of the plot. I avoid talking about plots because I don’t want to kill the show for people, especially one that I’m giving such a high rating. But couldn’t they go 24 episodes?

There is an OVA episode out there and also a new OVA coming out this June so there is a little more Angel Beats to get your fix.[yasr_multiset setid=0][yasr_overall_rating]