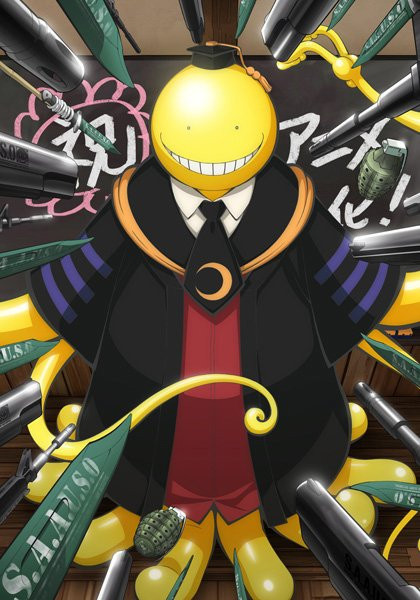 I decided to give people a peek at the shows I’m watching on a weekly basis instead of the ones that I can shotgun marathon because they’re already finished shows. 3 of these shows will be on the list for a while since they’re current shows but the other spots will be open.

The show is about an alien who has come to destroy the planet, like he did to the moon. He is giving the people of Earth a chance to survive but it all depends on kids who are the lowest class in school. They’re not delinquents, except for one but they don’t test well. They’re Earth’s last hope and no one outside of this classroom knows it.

Funimation has this as one of it’s broadcast dubs for this season. This is a new program where they dub shows while it’s still on the air in Japan and they are doing a great job with these.  Since I’m watching the dubs I’m only at episode 7. The OVA subbing was horrible which is why I decided to watch the dubs. This is a fun show, everything about it is done well from visuals down to the characters. How can you not like Koro-sensei and Bitch-sensei. This show gets my seal of approval. 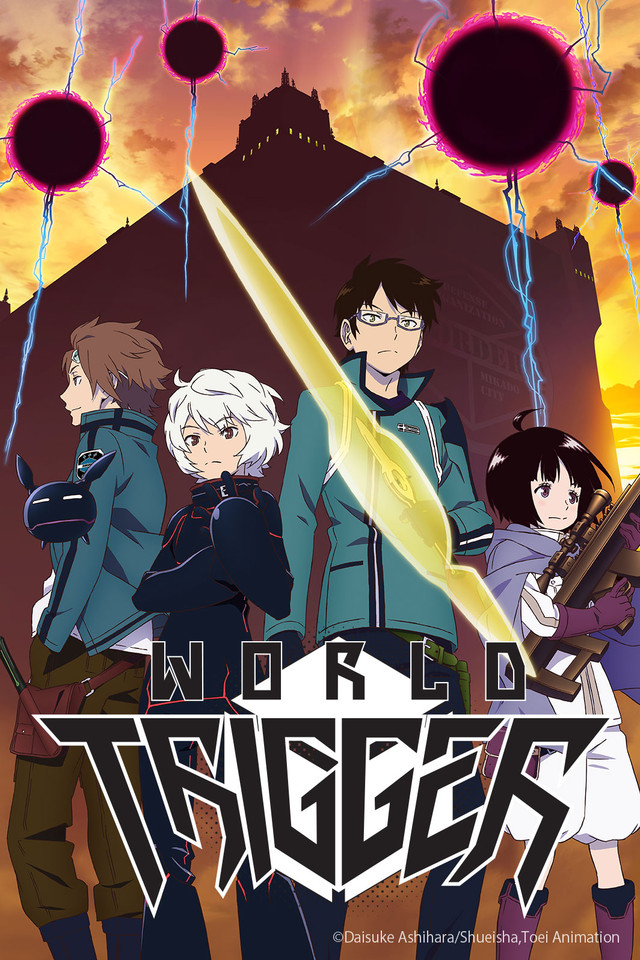 Next is World Trigger. This is a show that I was kind of avoiding because the names of the invaders. I know it’s not the best reason but Crunchyroll kept playing commercials on how “The neighbors” were coming. If someone invades the Earth, are you really going to call them “neighbors”?

Anyway, these “neighbors” coming to Earth mean business. The Earth even has a force to fight them off. What Earth doesn’t know is that there is a “neighbor” who isn’t like the others. He actually ends up helping Earth with the growing invasion problem.

This show was greenlit for 50 episodes and it’s at episode 24 now. I kept trying to find a reason to stop watching but I ended up watching all 24 episodes in a row (yes I took breaks for food and all that.) If you need an action fix then this show fits the bill. This is another one that gets my approval. Only available subbed at the moment.

Toradora! is a show from a few years ago. I’m not even sure how this one ended up on my list. It’s probably one of those shows that popped up on the side of Youtube while checking out something else. It’s a 25 episode show and I’m at episode 12. This show is available subbed and dubbed. Decent little show but started off kind of sloppy.

It’s about two teenagers, who happen to be neighbors and are helping each other out with people they have crushes on. The relationship between the two main characters makes me think of Haruhi Suzumiya and Kyon. Seemingly polar opposites but they work well together. The cast of characters around them is kind of colorful and distinct. Not your usual let’s throw character A in with B, C and D and see what happens.

I have a feeling that at the end of the show, they’ll be the ones getting together and the others will be pushed to the side. No I don’t know what happens. I don’t read ahead. If you tell me then it’s possible that you might die.

Little Busters Refrain starts off where the original Little Busters left off. They are definitely not your run of the mill group of teenagers. The main character is narcoleptic which is something not really touched on in TV. The other characters in the show have their own issues and some are even supernatural in nature.

The show is about childhood friends for the most part, who get together to form a baseball team. Now you’re probably thinking, okay they got a bunch of guys together to play baseball, so what. That’s not the case here. The team is actually mostly female and the females in this show are the ones who really shine. Not to take anything away from the guys because the show wouldn’t move without them but they end up being side characters a lot.

Little Busters came out a few years ago and Refrain is a bit more recent. Both are dubbed and I can say this one belongs on your list of shows to watch. 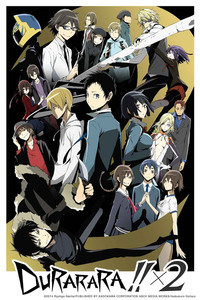 To round out the list is another show that is currently on the air, Durarara!! X2 Shou. The original Durarara! is on my list of shows you should pick up, even though there is one issue that turned people off. You’ll be happy to know that x2 doesn’t have the flashbacks that the first 12 shows of the original had.

The setting is 6 months after the events of the first series so you might want to start there. Without knowing those events, some of it won’t make sense. This is as true to the word ‘sequel’ as possible. It almost feels as if it’s just one big continuation. The major plot points of the first series are all in tact here.

This is also one of the broadcast dubs and is only up to episode 4 in dubs but like 11 in subs. I’m used to the dubbed voices since I watched the original as a dub so going to continue from there.

That wraps what I’m currently watching. Since Little Busters and Toradora! are older and already finished, I’ll probably get through those before the next episodes of the other 3 shows come out. So those 2 spots will need to be replaced next week.