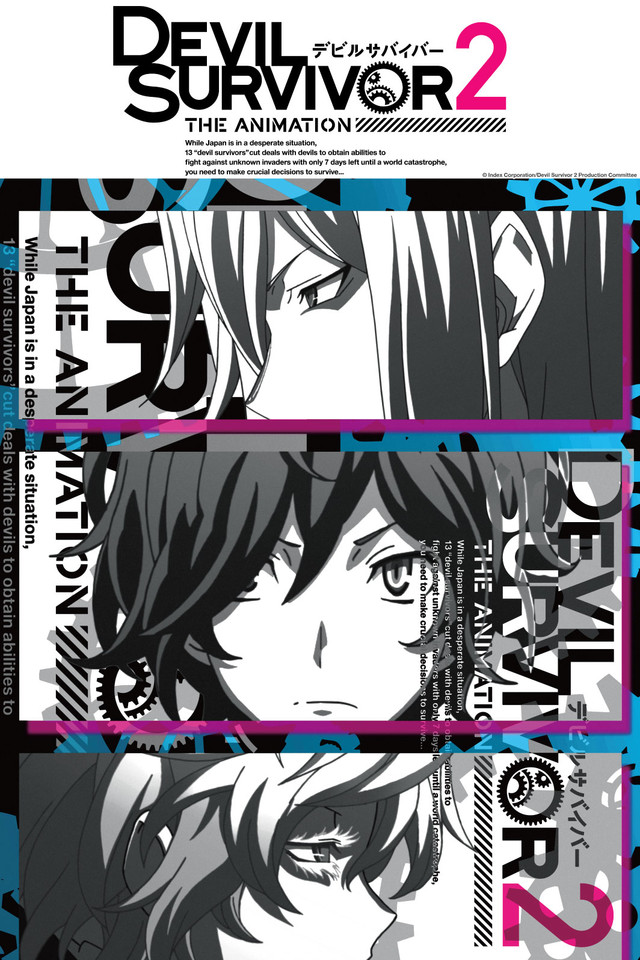 What is justice? What is evil? What is a friend? Do humans deserve the right to live? Who should have the right to determine the fate of the world? Sounds a little like Evangelion or Freezing doesn’t it. Well these are questions that must be answered in Devil Survivor 2. This show has some similarities to other shows and I’m usually not one to compare like this but I got the same feeling watching this, that I got from those shows. Those shows are Evangelion, Freezing, Deadman Wonderland, Durarara and these are some of my favorite shows which must be why the show pulled me in so quick. When I saw the name I thought it was a horrible name but I ended up watching the whole thing in a night.

Japan finds itself at a crossroads, when mysterious invaders known as Septentriones being to descend on their country. The invasion of the Septentriones is more of a test of the human race than anything else.  As this unfolds, 13 individuals a unique gift. Through a cell phone app they are drawn into a special contract, a deal with the devil, which leaves them able to summon powerful creatures. They become “Devil Summoners” which allows them these powers so they can fight the invasion. The invasion lasts only 7 days and each day gets progressively harder to survive. Friend or foe, everyone must band together to fight this menace.

The characters are given enough time to breathe but not enough time to have a full background but when it’s the end of the world, do you really care what someone did when they were in kindergarten or do you want to know that they’re by your side? The 3 main characters Kuze, Daichi and Io, (not sure I can call them that since at the end a few other characters come into the main picture), kind of remind me of the trio in Durarara. Their personalities work well together and even though Kuze is the main protagonist, the other 2 do play a big role. Along the way they meet other characters who were given the same power as them and forge bonds to help save the planet. This is one area where it got a little tricky, and I mentioned it being like Deadman Wonderland, trying to shoehorn all these characters into 13 episodes and give you enough on them so that you care that they’re part of the show.

The music and sounds for the show are very fitting and so is the art style. Everything is crisp with a lot of attention to detail. A lot of times that’s hard to do when everything is dark but they managed to get this combination right here. The plot is somewhat rushed due to the length of the series and number of characters they’re trying to get into the show.

I love the end of the world stuff so I may be biased, I may not be, that will be up to you. I personally think it was well done in every way. I did look for reviews online because I know it’s based on a game and games and books do influence the thoughts of some people. I just wanted to know what others thought and I see the show getting lower grades from people who have played the game which is unfair, the two should be judged differently. It’s not easy to get all that content into 13 episodes.