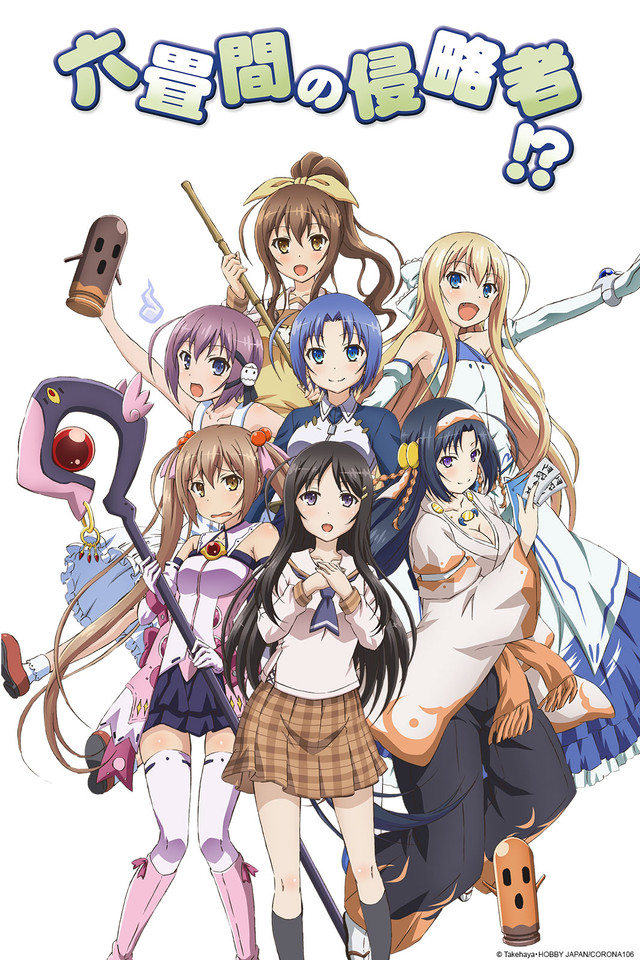 Koutarou Satomi is a high student who decided to live on his own. He settled on Apartment 106 at Corona House mainly because the price. 5000 yen, which is roughly $42. If I found an apartment for that price, I’d be tempted too. But as Koutarou soon finds out, there is a reason that Room 106 is so cheap.

Apartment 106 is cursed amongst other things. Koutarou finds himself in a battle with a young cutesy ghost, an incompetent witch, a voluptuous shrine maiden and others for control of Apartment 106. Each one has their reason for wanting the apartment and none are willing to back down in their pursuit. This leads to an interesting arrangement where Koutarou and the girls end up sharing the apartment until they can settle who gets the apartment.

Koutarou is your usual high school kid who doesn’t understand girls and is forced to learn on the fly. He ends up being a decent lead character and not just a wimpy kid like you usually get but he couldn’t even get facetime on the cover with all the girls. The rest of the characters make up an interesting cast even though a few of them are stereotypical. For example, the witch is a pink haired girl. Most pink haired girls are clutzy and very soft and sweet, which she is BUT she is not very bright where a lot of other pink haired girls are. So she mostly follows the usual pink hair trope just like the shrine maiden is a very caring and devoted individual. While they do follow the trope stereotypes to a point, they do veer off to definitive separate personalities.

The story and plot fit together pretty well like other shows based on one room or one goal with multiple characters going after it. Unfortunately 12 episodes is not enough to flesh it out and give background. Each character got enough screen time to advance their story and so did 2 side characters who end up being part of the main cast by the end. The one thing that was kind of weak was the art in some spots. The NPCs are shown without eyes and lacking other details but everything else is clean.

The show ended with 2 things that lead you to believe that the show will get a 2nd season and I feel it’s deserved with this one. If you watch the last episode past the credits, you get a scene which tells you there’s more to the story (obviously is because the books) and the ending scene has “The End?” with the characters in chibi form talking like the show will be back. It was out in 2014 so there is still a very high possibility that people are thinking about this show and will possibly get together and make it happen.

I expected nothing from the show but it ended up being one that I liked. Of course this is my opinion and yours may differ.