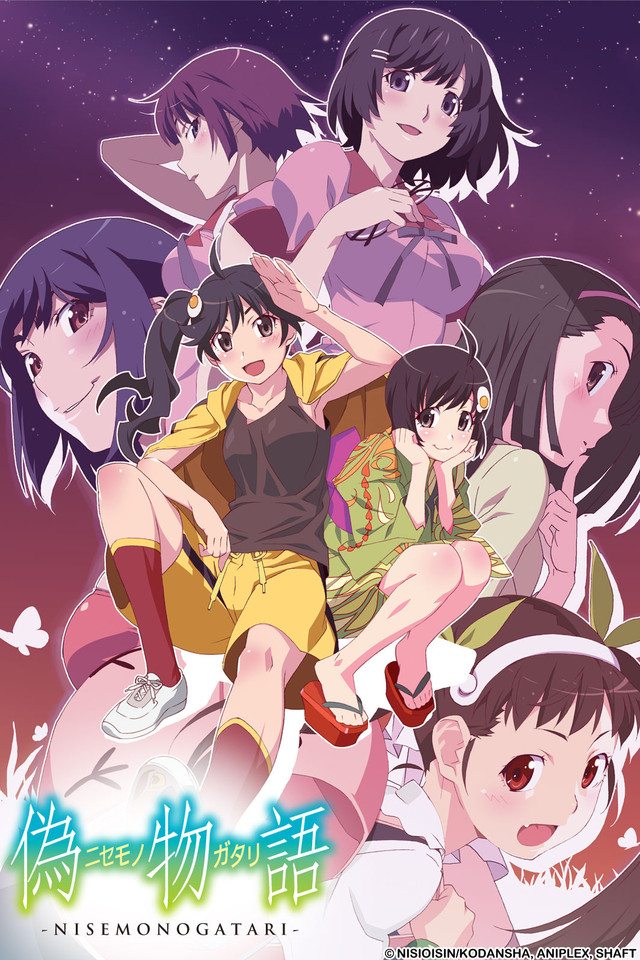 This is a continuation of the story of Bakemonogatari, with the main focus being on Koyomi’s sisters, also known as the Fire Sisters. A swindler comes to town, the same one who indirectly put the curse on Nadeko in Bakemonogatari and the sisters are out to stop him.

Nisemonogatari deals a lot more with character growth and interpersonal relationships. It even gets really incesty and it’s not just one time, it’s both of his sisters on a few occasions. It isn’t some long drawn out act or sex, it’s probably what you would call odd foreplay or fetish stuff. I’m not sure how to describe it but don’t go thinking I’m referring to sex, the show does not go that far. I’m really not sure what words to use, it’s just awkward.

Also, the lolicons will get their fix too with both sisters and Koyomi’s “familiar” Shinobu, who is actually the one who turned Koyomi into a vampire in the first place. She’s bound to him in a master/familiar type relationship though they seem to act independently and that may be partially because she’s a tsundere when she does decide to talk. Anyway, there are scenes with her and him in the bathroom and she looks like she’s 8 (though she’s 400 years old) which he even says. This is one time I’m glad Crunchyroll censors. It’s a few minutes from one episode so it’s not a major plotline or anything.

The avant garde style to the art, the changing intros and all that are still in tact. The show while it has it’s parts that make you do a double take, still maintains the same quality throughout. The main subject matter will always be the occult stuff but yes there is the other stuff to deal with. Japan is a society that is very different from the US and it takes some getting used to in some cases. I’ve seen the stuff in other shows before so it wasn’t a shock really but to some it might be. I’m probably more desensitized than most people.

Even though there is still that 5-10 minutes of weirdness, the show is still a strong show but it’s not for everyone.