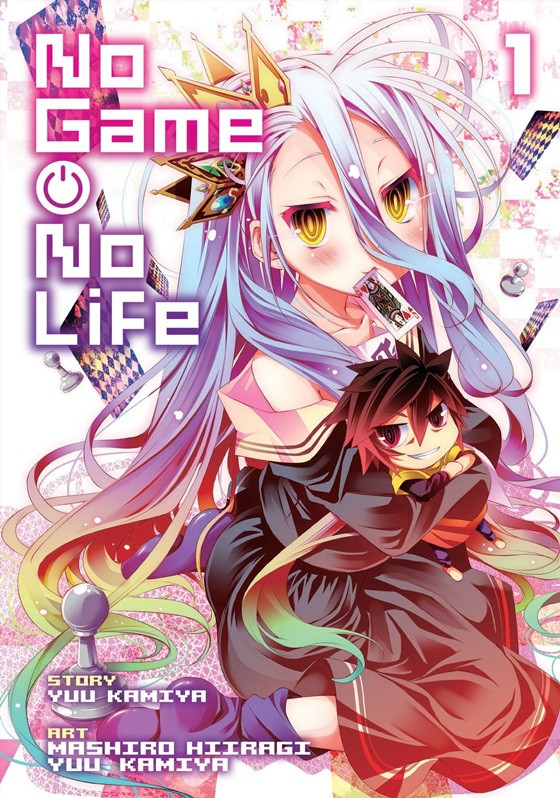 No Game No Life is another show that was recommended by the woman I call senpai. As I’ve mentioned, she seemed to get it right most of the time with the ones she picked and it’s probably because we have a lot in common, which may be more of a curse than a good thing. This is one that I don’t know if I would have picked on my own unless it randomly came up like a Youtube side video or link in Crunchyroll.

The story is based around 2 NEETs in Sora and Shiro. Sora is 18 and Shiro is 11. They are “brother and sister” though not blood related. Together they are known as Blank, a team of skilled video game players that dominate every game they’re in. One day, they receive a message which had a test to see just how good they are and when they passed the test, they were transported to another world with nothing in their pockets and no way to survive. Shiro and Sora had to learn and adapt quickly so they could get a place to stay and begin their adventure in this new world that is based on games. How will they fare in this new world?

Shiro and Sora are your main protagonists but they do come off as unlikeable in the first episode. NEETs and hikikomoris don’t do well in solo settings but when they’re interacting with others, they can blend in. Push past that first episode and things get more interesting but the first episode does give you a bit of background into who they are. The support characters are an interesting array of characters and tropes. There’s a bit of fan service though I wouldn’t call it full on ecchi. But there is one thing I could live without and that’s the loli stuff with Shiro. I can accept some of the other things in the culture but the loli stuff…just no. You know my stance, just say no to loli.

The art in the show is what you’d expect from a fantasy type show, well drawn out, colorful and fits the time period that is being portrayed. The music, sound and everything else around the show are well done. There weren’t any shortcuts taken.

No Game No Life is a simple yet complex concept with everything well drawn out. This show could have been given a little more time to breathe but they did well for ramming it all into 12 episodes.  Another show which may pique your interest if you like this one is Problem Children are Coming from Another World, Aren’t They. People are clamoring for s season 2 but that’s highly unlikely since it’s been a few years and most anime is just a way to boost book sales. If there ever is a season 2, I’m all in. I give No Game No Life a 4.5 star rating.