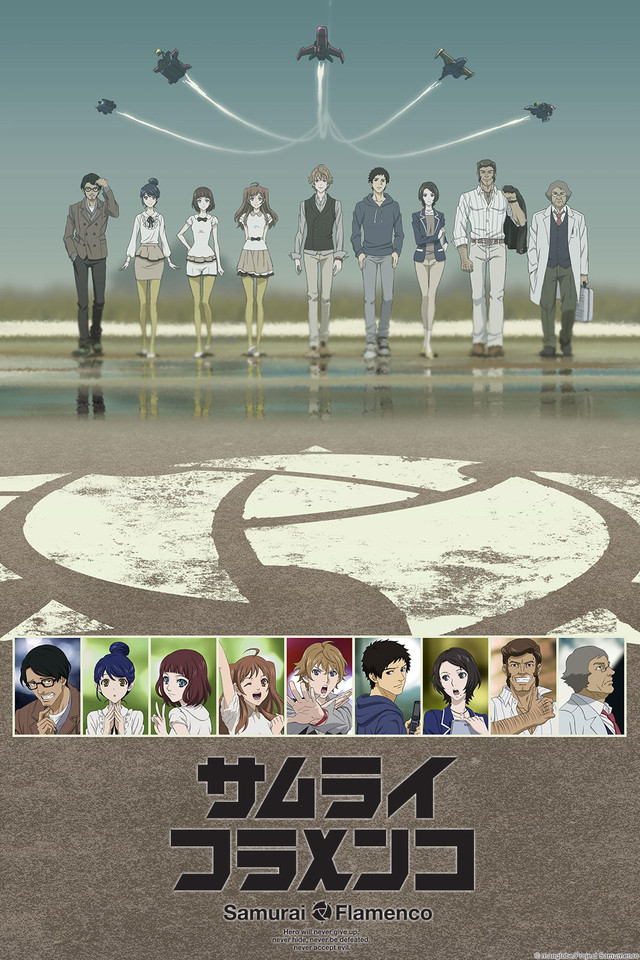 Samurai Flamenco is a show I randomly picked on Crunchyroll. With anime, sometimes you can’t tell from the title, if the show will be something of interest or not. I like Samurai lore but I don’t flamenco but the show isn’t about either.

Masayoshi Hazama is the main protagonist who has decided to become a superhero. He has your usual superhero issues like hiding his identity, deciding which fights to take on and which to pass on, a scientist trying to help him out and even has a newspaper publisher who is trying to unmask him (sound familiar? Peter Parker?) Along the way he meets Hidenori Goto who finds out his identity in an odd twist of fate and he begrudgingly becomes an ally to Samurai Flamenco. As things progress he gains allies, who for some reason he ends up living with or they just happen to show up a lot, an unexpected partner and many more somewhat colorful characters.

The show does a decent job of pacing and giving the characters a little meat on their backgrounds even if it’s superficial but for this kind of show, you don’t need much of a background on them. There is a lot of fighting, monsters, colorful superheroes and more. The art for the show is very good with one or two minor blips but nothing major. The music for the show wouldn’t be my choice for a superhero show but it does fit. Production value on this one is pretty good.

The show is a goofy comedy which has it’s funny moments but to me, it felt bland most of the time until you get later into the story. With this show you get 22 episodes of old school style writing, decent pacing and bad humor, think Voltron and other mecha/superhero anime from the 80s. The first 7 episodes are regular everyday criminals and then it becomes superheros vs super villains and the show gets better from that point(didn’t Spiderman start like that too?) I assume the fights scenes would be what you get in a Power Rangers type show, colorful suits and all, never seen the show but I have seen commercials. If you have the time then watch it but don’t go run and turn it on like it’s going to be the next 5 star show. It kind of grows on you as you continue watching. My score started at 3 and now it’s 3.7.