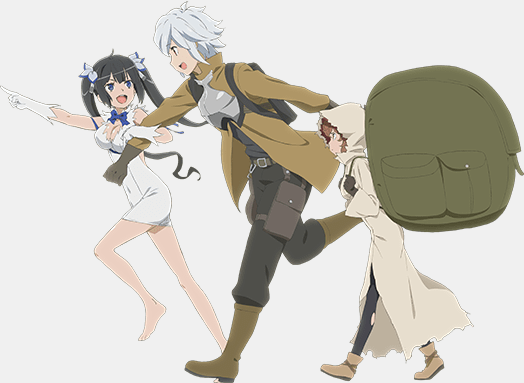 So we’re about halfway through the spring season so let’s check out what Killswitch is still watching, liking, hating and all that good stuff. Here is a link to my first run through on the season. This list does not include the Funimation shows which I will have to start watching at some point but I’m waiting for dubs on those since a lot are in the process already. Funimation does look like they have some really good ones. So here we go…

Is It Wrong to Pick Up Girls in a Dungeon? – We’re like 8 episodes in and I still don’t know if it’s wrong to pick up girls in a dungeon but I’m liking the show. It’s not a perfect show but this is one I can see getting a long run if they treat it right. I’m talking like Fairy Tail or Hunter x Hunter long. Every episode that comes on, Hestia is trending at the top of Twitter and it all started because her “boob ribbon” which made no sense to me but it is what it is. She’s a cute character, almost moe like until she shows her inner yandere. Unleash that yandere Hestia. Things could get interesting in the last 4 episodes.

My Love Story!! – I was turned onto this one late but it’s a good one. The main character is a bit of an ogre which makes things weird but it’s a love story, the “nice guy” actually wins one. Can you believe that? I am not joking. The “nice guy” won one. Will he end up a winner? Who knows but for now he has won. I’m still in shock over that. Nice guys don’t win, what the hell is up with this one trying to shake the world.

Plastic Memories – Really liking this show but it has pacing problems. That’s what happens when you try to rush a year into 12 episodes. The first 7 episodes cut down like 10 months. Isla is my favorite new character. I don’t know why but she just is.

Gunslinger Stratos – Not sure how I missed this one and left it off (Thanks Zero). Still watching, it’s jist my kind of end of the world, dystopian type show.

SNAFU Too and Nisekoi 2 – I liked the first seasons on these two and I’m just waiting for them to finish up so I can marathon through the whole season.

Punch Line – If the kid sees panties, the world could blow up. Awesome storyline right? Yeah right… but guess what. That is not the whole show. While it isn’t the best show in the world, it’s decent and I’ll keep watching.

Etotama – I wrote this off as drek and it’s still not a very good show but at least it follows it’s plot, has decent art, and is consistent which is something you can’t say about most anime these days. Has a lot of cutesy CGI stuff but I wouldn’t call it a moe by any means. It’s okay but I wouldn’t rush to go see it. It may belong in the last category but I’m giving it a chance because it follows it’s plot and everything else that a show should do and most don’t these days.

Triage X – It’s okay. It was obviously a show about breasts but guess what. There is actually a storyline and all that behind the sometimes misshapen breasts. It’s not Shakespeare or anything but it’s okay and it’s only 10 episodes.

Yamada Kun and the Seven Witches – This show has some people who like it a lot and some who hate it a lot. It’s one of those 50/50s and I think it’s okay. I wait a few episodes then watch like 3 at a time. Seems like they may rush to the ending though because a lot of little stories in between but that’s high school for you.

Re-Kan! – I just can’t watch. Sorry. I made it through 3 episodes and bleh. I’ll probably marathon it just to get through all of it.

Rin-ne – Yeah, to me this one is hot garbage.

Wish Upon the Pleaides – So much moe that it’ll rot your teeth. I watched 3 episodes and there’s no art issues or anything like that, just too moe moe moe.

Still checking World Trigger, Durarara x2 and Assassination Classroom from the Winter schedule and they have not disappointed.