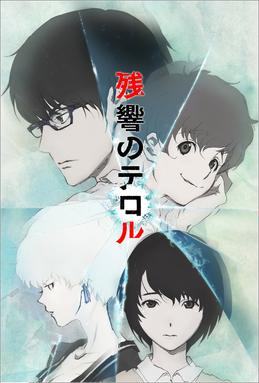 Terror in Resonance is one that seems to have slipped under the radar. There could be several reasons for that. These days you don’t get a lot of thrillers due to the production committees not recognizing what people want. Instead that produce moe show after moe show which I guess is making them money but people want gritty, thriller shows too.

Right from the beginning, you have things blowing up and you’re thrown head first into the world of Terror in Resonance. It takes place in an alternate present where Tokyo is hit by a terrorist attack that devastates the city. The only thing they have to go on in terms of clues is a video that was uploaded to the internet by a group calling themselves Sphinx.

The main protagonists go by Nine and Twelve, the reason will be revealed later in the show, you’ll have to be paying attention. They form the group Sphinx even though the two of them are not supposed to exist. These two teenagers decided to “wake up the world” with the plans of mass destruction. There are several other characters who play a part in this. You have the detective chasing them, government officials from the US, Lisa who becomes an accomplice and a few others who stand out. Each of the characters really stand out and feel as important as the next.

As with anything Shinichiro Watanabe directs, the music and sound are top notch. Everything in the show is done well and no shortcuts are taken. The mood, atmosphere and everything else in this show were done to perfection.

I really wish there were more thrillers out there. This one definitely delivered even if it was only 11 episodes. Anything directed by Shinichiro Watanabe seems to be done just right. Since this week I watched his other shows: Cowboy Bebop, Samurai Champloo, Cowboy Bebop Movie, I figured I’d throw this one in too and just like the others, this one is highly recommended by me. Don’t forget to add Space Dandy to that list too.