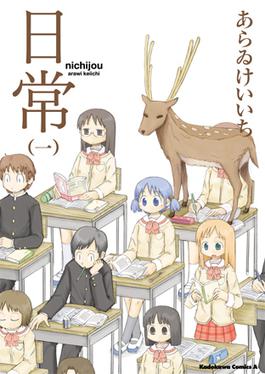 Nichijou supposedly means everyday but if this is someone’s everyday life then I want in. When do you see a principal actually German suplex a deer or an over enthusiastic hall monitor with a gatling gun or a guy who acts like a rich kid who rides a goat to school and has a butler with him or a girl flipping a goat. If someone gets to live this everyday then I’ll gladly go back to school just to watch the ridiculousness unfold.

The show is similar to Chronicles of the Going Home Club in a lot of ways. It’s a comedy show with some seriously ridiculous situations that will leave you laughing, shaking your head or saying “WTF.” There are a few normal-ish situations but most are not. The situations here aren’t as fast paced though, you don’t end up rewinding to read subtitles or anything like that. It also has elements of the Monogatori series with quick scene changes and title cards plus some abstract styling.

The main part of the show revolves around Mai, Mio and Yuko, and their school. Yuko would probably be called the main protagonist since most situations are about her. She always greets people with “selamat pagi” which is Malay for “good morning”. I don’t know if I’ve seen as many over the top reactions from one character before, she really is out there. There is a secondary main thread which revolves around Nano, she’s a robot made by a professor who happens to be 8 years old. She takes care of the professor like an older sister or mother. Nano also longs to be a normal girl, without a wind up key in her back. These 2 threads actually do meet so the show does change from all comedy to add a little slice of life type stuff but don’t worry the comedy doesn’t stop. Of course there are other characters that make up the ensemble too but I don’t want to kill their introductions.

This show really has some ridiculous scenes like episode 25 has one of the longest chase scenes in an anime, going through the school, trains, a lake and they even save a kid during the chase. The full principal vs. deer fight is almost like the chicken fights in Family Guy, I was waiting to see if there was going to be another. None of the gags are long and drawn out, it’s like they hit the formula to have them be almost the perfect length.

Many shows out there try to do something like this but the situations just aren’t very funny. This show definitely bucks the trend and may be the best one of the group. I haven’t checked them all out since there are sooooo many but this is one that goes to the top of the list of school comedy animes. I’s definitely a well done show and there aren’t too many shows about nothing that can keep you entertained but this one should.