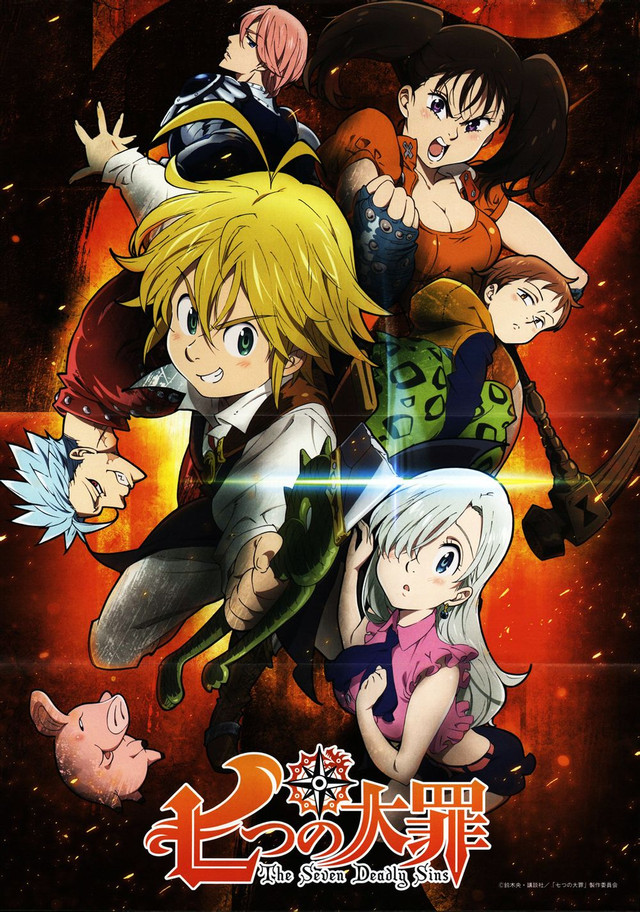 The Seven Deadly Sins is another in a long line of recent fantasy based animes. Since I’ve been watching Is It Wrong to Pickup Girls in the Dungeon?, I decided to check out a few of the others. Log Horizon is one on my list but I’ve been looking for the shorter shows like this. Log Horizon will take a big time investment but I’ll get around to it. For me, this genre comes right behind the mystery/thriller genre which you should know I’m a big fan of by now.

The show revolves around a group of knights known as the Seven Deadly Sins. They disbanded after they supposedly plotted to overthrow the Kingdom. They were thwarted by the Holy Knights but the rumors are that they still exist. Ten years later, the Holy Knights planned a coup and captured the king to become the new rulers of the land. Princess Elizabeth set out on a quest to find the Seven Deadly Sins.

The Seven Deadly Sins are the personification of the sins. Meliodas is wrath, he’s perverted when it comes to the princess who looks like his former lover, and he’s the leader of the group. Diane is an odd one, she’s envy. She is also a 30 foot giant but she’s so kind hearted and sweet sometimes that you forget that she’s envy. Ban is the most unlikeable of the sins, greed, but he is also the most interesting of the group. The others play a rile too but they’re even up as support characters.

The cast of characters definitely keep you in this and the plot, art and everything else are on point too except a few perspective issues. Sometimes you don’t know what to expect from a show that you haven’t heard too much about but this show was constantly moving, action left and right. Some flashbacks to connect you to the characters. There was enough there to make you feel like you got a complete story.

I really had no clue what to expect but in the end, I ended up really liking this one. It would go on my list of recommendations if this is the type of show you’re looking for. You know how a lot of action shows have like very little action? Well this one has a lot of action and adventure, you won’t sit there waiting for something to happen. The ending was open ended so there may be more to come.