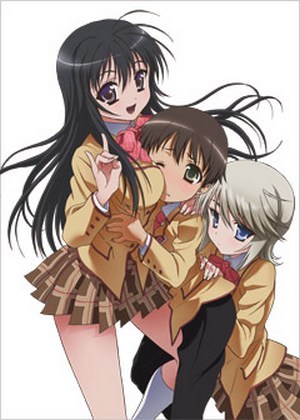 Kanokon is one of the links that came up on the side of Youtube while I was watching something else. I had no idea what it was but I figured why not see what it is. Some day I have to go to a Japanese school and see if the wimpy kid really does get the hot girl.

Kouta, is a country boy who lived with his grandfather, but recently moved to the city to attend high school. Of course there are changes moving from the country to the city but nothing could have prepared the him for Chizuru, a beautiful fox spirit who wants him in the worst way. But not only Chizuru is after him, there’s also a wolf spirit too who’s just as enamored with him. This leads to other supernatural events and life for Kouta gets much more chaotic.

Unfortunately when it comes to characters, they lack character. Kouta is just a wimpy kid with a wimpy voice and he has what would be deemed a hot girl after him. He seems to try to run from her all the time. Even the other students wonder why he has a hot girl around him, loving on him. The hot girl Chizuru is like an animal in heat (she’s a kitsune so it’s kind of implied anyway) which in these shows has it’s good and bad points. Then you have the wolfgirl, Nozomu, who shows up later and is also after Kouta. She is more of a reactionary character which is always kind of odd, kind of kuudere-ish (it’s a word now, deal with it).

Everything around the show is pretty average. The art is average, everyone looks younger than they should be on top of that. It makes Kouta and Nozomu look like elementary school kids which is obviously a problem in an ecchi show. Though Nozomu is a loli so I guess that comes with the territory. There’s no real plot, it seems to go episode to episode. The music is average at best too. It’s just average all around. They introduced about 20 characters but it revolves around the main 3. That’s a lot of characters for a 12 episode show.

There really isn’t much I can add. If you like ecchiness then you’ll probably love it, if not then pass on it, there is a lot of ecchi. The OVA is also full on ecchi.