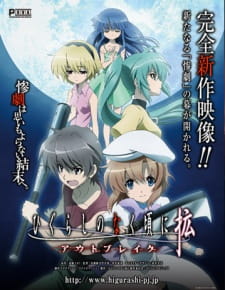 The town of Hinamizawa can’t seem to catch a break but it can catch an outbreak. Yes folks, I’ll be here all week 😀

Alright, enough bad jokes. Yes, we’re back in Hinamizawa with Keichii and the girls. The curse that never dies is back but this time in the form of a viral outbreak. As you know already, the people in that town aren’t the brightest and they just fall in line instead of looking for real answers. This time the crazy townpeople are after Satoko (as usual) and Keichii and Rena since outsiders are being blamed for the virus. Oyashiro of course is somehow behind it too.

The same things that made the first series controversial are here too. The pure unadulterated violence is back, not that the second series was bad but it just wasn’t the same without all the violence. This is a 50 minute romp with the same familiar characters. If you’re a fan of the series then you’ll like this one too. The only issue I have is that it needs an ending or something, just felt like it got cut off too early.