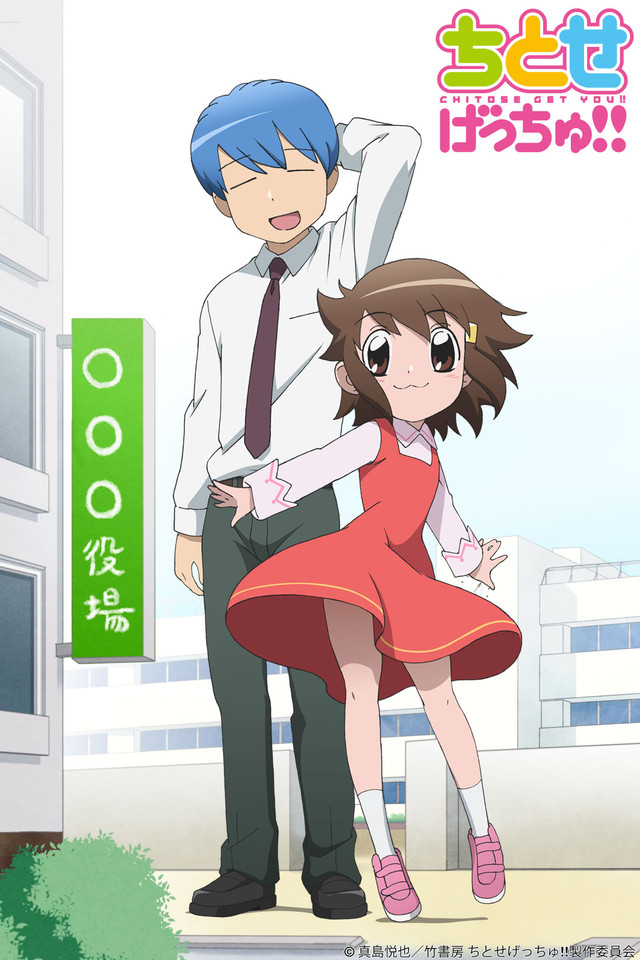 Chitose Get You!! is another one of the recent short anime series that have seen a resurgence. This one is 26 episodes and 2 OVAs. Each episode being 3 minutes long.

Chitose is an 11 year old with a crush on an older guy who supposedly saved her life. When you watch the first episode, you’ll learn of this “life threatening” situation. Since then she has been in love with Hiroshi, who happens to work at City Hall which is right next door. But Hiroshi is actually in a pre-arranged marriage situation with her teacher. Chitose ends up going to war with her teacher over Hiroshi, which leads to some comedic situations.

Chitose has her 2 friends with her who sometimes help her with her antics. One who is always in different costumes and another who is mistaken for a boy on a few occasions. The teacher is a typical middle aged woman. Then there’s Hiroshi, the guy they’re both in love with. He’s your usual somewhat clueless guy that you get in animes, at least he looks that way but he really isn’t. He falls more into the general nice guy role.

These short animes aren’t done on high budgets or anything but they get their point across with what they have to work with. The art in the show is okay, not bad but not great. They did get a little creative with the endings though. The first 13 episodes is Chitose and her friends putting on what looks like a mini concert in the classroom. They’re just on stage singing a Chitose Get You song. The next 13 episodes has them singing on a rooftop. You don’t usually see something like this in these short animes.

The only word I can think of to describe the show is cute, and that’s not a word I use. It’ll make you laugh at times, like it’s supposed to. Though the situation is one that’s a little odd. When do you have an 11 year old that can go toe to toe with a grown adult. If you’re looking for other short animes then try Comical Psychosomatic Medicine, Oneechan ga Kita, Teekyu, Haiyoru! Nyaruani or Takamiya Nasuno Desu!