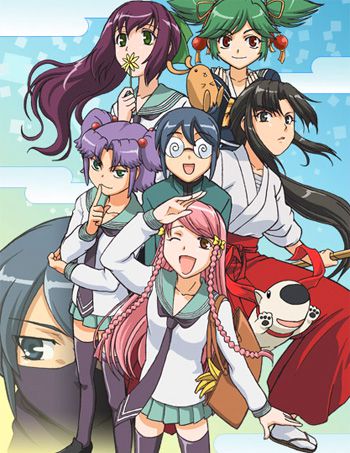 I always go back to check out some anime that I haven’t seen before and this was no different. The premise sounded like something I might want to check out so I added it to my queue on Anime Planet or Kissanime or one of those sites. That’s not important anyway, on with the review/preview.

Mamoru comes from a family of ninjas who has been indebted to to their neighbors for over 400 years and must protect their daughter, Yuna. It would be easier if she wasn’t such an airhead and always getting into trouble. Just about every episode she goes missing for one reason or another and Mamoru has to protect her without her knowing. Though if he changed into his ninja gear in front of her, she might not even realize it, yes she is THAT dumb. Each episode is pretty much self contained until close to the end. It is a harem anime so he does meet several girls while trying to protect Yuna.

Everything centers around Mamoru. Mamoru is disguised as a normal high school kid for the most part, with some super thick glasses, when he goes ninja, the glasses come off. He can’t reveal his identity to Yuna. Mamoru is a typical clueless teenager when it comes to love and women. Yuna is his childhood friend and girl he has to protect by the code of the family. She’s really not bright at all but seems to always come out on top. She is in love with Mamoru but can’t tell him. The usual teenagers trying to do this love thing for the first time. Then there’s Airi the rich girl, best friend of Yuna and also likes Mamoru but can’t tell him though she gives enough hints. She’s like Peppermint Patty to Charlie Brown, always torturing him instead of being nice to him, then wondering why she can’t get his attention. She also does not know that Mamoru is a ninja. There are a few other girls too who complete the harem, all with ninja combat skills.

The art fits it’s time period though there were shows that were better but there are some that are worse. It falls in the middle of the pack. The music doesn’t seem to fit at all. It may be a harem show but it’s still about ninjas and the music seems like it would fit a moe show much better. The plot is consistent though so a few points for that.

This show is an example of some of the early 2000 stuff that made me get away from anime for a while. A long while actually…This show is just blah bordering on bad. The ending seemed like it was heading in the right direction then they gave you a WTF end. At least they could have given us that but nooooooo, had to go and screw that up.