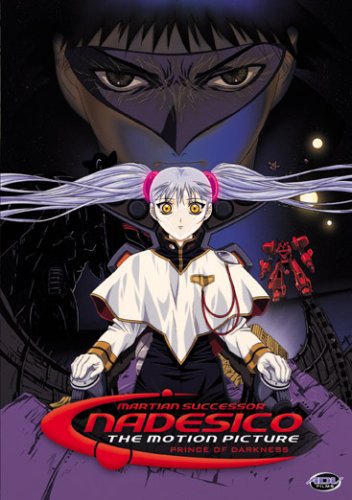 Prince of Darkness is the follow up to the Martian Successor Nadesico series. It’s been 2 years since the battle of Mars and the Nadesico crew is now scattered, with several members presumed dead. A new group called the Martian Successors wants destroy the peace and to continue the previous war. Ruri may have been 11 at the start of the original Nadesico’s voyage but now she’s 15 and captains the Nadesico.

To prevent the Earth from falling into another war, Ruri starts collecting former members of the crew. Some have undergone some small changes like Ryoko has black hair but most of the crew remains intact, personality and all. Most people will want to know about Akito and Yurika, well they do make an appearance but probably not in the form you’d expect. You probably won’t even recognize Akito but he also joins the mission so that he can save Yurika.

They really did a good job with keeping the characters relatively the same compared to the series. They were able to keep all the same voice actors and keep that flow they had. They managed to keep everything cohesive with the series even though there is a little gap between their release dates. With the exception of a few things like Ruri growing up, you wouldn’t know you were looking at something completely new, it would look like it came right out of the series almost.

Ruri does not make a very good lead character, as a matter of fact, she kind of drags this movie down. It’s rare that you find a kuudere character who can have the show centered around them. I can’t even think of one at the moment. I’d say The Disappearance of Nagato but she has so many known characters around her and they do more than enough talking to carry her. This makes the movie hard to watch for the first half because it’s mostly Ruri. As a background character she was great but as a lead, not so much…

It’s a decent little follow up to the series even though there were a few things I didn’t like. I wouldn’t put it on the recommendation list but if you watch the series then watch the movie too. I do think this movie is why the series was cancelled though.
[yasr_overall_rating]