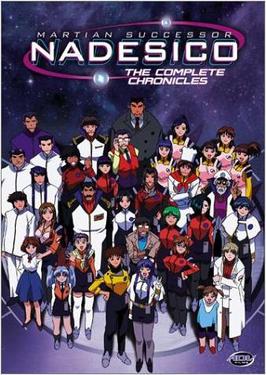 It is the year 2196 and the Earth is at war with a race of aliens called the Jovian Lizards. The Nadesico is a battleship created by the Nergal company. The ship is a powerful battleship that protects the galaxy but it’s manned by a crew of oddballs. They’re actually experts in their fields but have some serious personality disorders.

The crew takes on several jobs where they have to launch their mecha fighters known as Aestivalis. The Aestivalis are like the enforcers and first line of defense. They have more experienced pilots but Akito, a novice and backup pilot has to fight and learn how to, at the same time which leads to some interesting situations. He’d rather cook and watch an anime called Gekiganger 3 than fight the war. What Akito doesn’t know, since he can’t get answers from anyone, is that he is one of the most powerful weapons that the Nadesico has.

The two characters that the show revolves around are Akito and Yurika. Akito is not a fighter and doesn’t want to be, he just wants to cook but since he has the nanites that let him pilot the mechas, he’s a backup pilot. When his colony on Mars was destroyed and he was transported to Earth, he decided to follow a girl also from Mars and she happened to be Yurika who is now the captain of the Nadesico. He enrolled as the chef on the Nadesico so he can try to get answers about Mars from Yurika. Yurika seems to have lost her memory but she knows she wants Akito and chases after him all the time, along with other females who start to fall for him too. She is a clumsy, goofy, unsure captain who’s first responsibility should be the ship but to her, Akito comes before everything else.

The other characters are an interesting bunch, there’s characters like Ruri who is 11 years old. She’s artificially enhanced and controls the systems of the ship. You also have the doctor who explains things. Whenever someone needs something explained, she pops up out of nowhere to explain it, there’s even a point where they wait for her and she doesn’t show up because she was kidnapped. The crew changes over and over as the show progresses and different groups take an interest in the Nadesico, Akito or other items. This crew of otakus, misfits and goofy women really make things interesting.

Martian Successor Nadesico is fashioned like an old school show, like Robotech and the other mecha shows. There is a much bigger cast than usual so sometimes you find yourself losing track of who each person is with the exception of the main characters like Akito, Yurika and Ruri. Even the show inside the show, Gekiganger 3, has the same old school mecha show feel. Gekiganger 3 is not an actual show, it was made just for Nadesico but with the way the show flows, you would feel like it’s real.

The show is okay but it’s a lot about the harem type stuff more than battles. Don’t get me wrong, there are battles but this kid has almost all the females after him like Kenshi in Tenchi Muyo! War on Geminar. Would I watch it again? If I had the time but I’m not rushing to put it at the top of my list. If you do watch the series then watch the movie followup, Prince of Darkness.