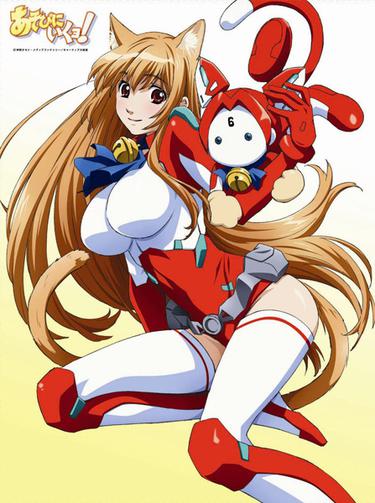 Humans have always had the belief that there are aliens out there but they probably didn’t look like these aliens. These aliens are right out of someone’s fantasy.

Cat Planet Cuties starts just like it’s an ordinary day at a BBQ. A teenage boy, eating food with his family, talking to his uncle and all that jazz. Sounds pretty normal right? Well his uncle introduces him to a girl who he notices has cat ears and a tail. Kio doesn’t think they’re real at first but his uncle gets them drunk and the next morning he wakes up in bed with a very well endowed catgirl. To Kio’s surprise, she’s all real and that’s where the adventure begins.

The Catians, the race of catgirls, are on Earth to set up diplomatic relations. Eris, the one that Kio meets, is their representative. A sweet, kind, catgirl who has come to Earth to make peace. What can go wrong there? Well many things can and do go wrong as Eris tries to acclimate herself to Earth’s customs. They’re chased by government agencies, groups who want to be the first to have alien contact (doesn’t Kio count?), they have to fight their mortal enemies the Dogisuians (never checked the official spelling but yes, women with dog ears), all in the name of peace.

They try to add little things here and there which don’t really add to the show itself but it shows…something. Like at the beginning of episodes they do 30 second intro narrations that are references to shows from the 70s or 80s like Greatest American Hero. The show has a few different endings too but they aren’t anything out of the ordinary like Super Sonico where you have completely new animation endings. It’s just a different female character each show, like 3-4 different ones.

I’m giving Cat Planet Cuties a little higher ranking than the typical ecchi harem show. While it doesn’t break new ground, it doesn’t stray off course. It’s a consistent show from beginning to end, well as consistent as an anime can be with cat girls from another planet. It’s just a nice simple little harem anime with some action thrown in.