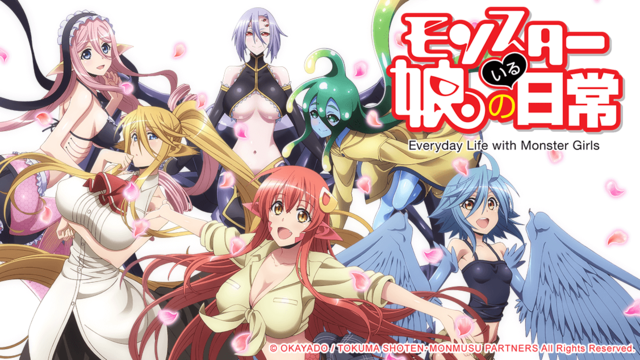 I had no clue what to expect with this one. From the stuff I read ahead of time, the premise was a guy who had to live with a monster girl and adjust his way of life to accomodate her. But that isn’t the whole story. At that time the only pictures available for preview had Miia and Kimihito who are the main characters.

So the Japanese government was keeping a big secret. Creatures thought to be mythical like centaurs and harpies are actually real. Three years before the start of the story, Japan passed a bill called the “Interspecies Cultural Exchange Act”. Now these creatures known as liminals are allowed to be part of human society, sort of like exchange students but they have stricter rules and regulations against them. Humans and liminals can’t harm each other or mate or face long jail sentences.

Kimihito didn’t volunteer to be part of the program but a scared and embarassed Miia was delivered to his doorstep by Ms. Smith, by mistake. Kimihito didn’t have the heart to send her away and they started living together. As the story progresses, more and more liminals come in contact with Kimihito, whether it’s by accident, on purpose or otherwise and he ends up houses them all whether by choice or not, mostly not by choice. They have to get along like one big happy family with Miia being top dog (in her mind) since she was there first. She’s not wrong (or so it seems) but some of the others have different plans including some who don’t see him as a mate but more of a master. Each liminal is vying for his attention, especially after a law change makes it possible for him to marry one of them. Will Kimihito survive the liminals and the oblivious Ms. Smith? Tune in and find out.

They did make it seem like it was going to be more plot based in the beginning but then it was introduction after introduction so there wasn’t enough time for a serious plot though they did try to add something towards the middle to the end of the show. There just wasn’t room to introduce them all and have plot too. They didn’t even get in all the characters from the books so it would be way too hard to add all them and a plot in 12 episodes. Wonder if there will be a second season. It was pretty popular with men and women.

The show had decent artwork and backgrounds. Some spots were excellent and others were good but it wasn’t outstanding and it didn’t have to be since it’s a harem comedy. One of the interesting parts of the production is the opening and closing songs are actually performed by some of the voice actresses. Some others shows do this too but it’s not usually most of the cast like it is here.  Speaking of voices, I would not be surprised to see this dubbed very soon and not years later like shows of the past.

Overall it’s just a fun, ridiculous comedy with some ecchi moments thrown in. The first episode did make it seem like they may try to go with a serious plot but then it turned into what the title says it is, everyday life with monster girls. If you’re just looking for a fun comedy show then this would be a good choice. Don’t look for anything too serious in the show.

Right when I was done typing this up, I found an article that mentions that the show might have been greenlit for season 2 on Honey’s Anime and it looks like Crunchyroll picked up on the same thing too. There is something to look for in the finale. You can sign me up for more monsters.