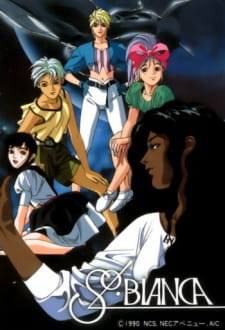 Sol Bianca is a 2 part OVA from the early 90s. The story is about 5 female space pirates who obviously go around pirating. They pilot a ship named the Sol Bianca, a spaceship that has a higher level of tech than all the others in the galaxy. While going on missions they run into all sorts of enemies, legal and illegal.

While they are pirates these women do have compassion. In the first episode they have a stowaway and they go on a mission for him to find his parents though it’s only because they can search for a treasure along the way. The second episode is a straight pirate mission.

The show is from the early 90s so don’t expect some fancy sci fi effects or anything. There is one thing that you usually don’t see though. The ship is shown from all angles and fully animated where most shows would have pan shots and whatever else. Besides that, everything is exactly what you’d expect from a 90s show.

Definitely would have liked to see a full season on this show. There is a 6 part OVA that followed a few years later. If you have 2 hours then check it out this short OVA.