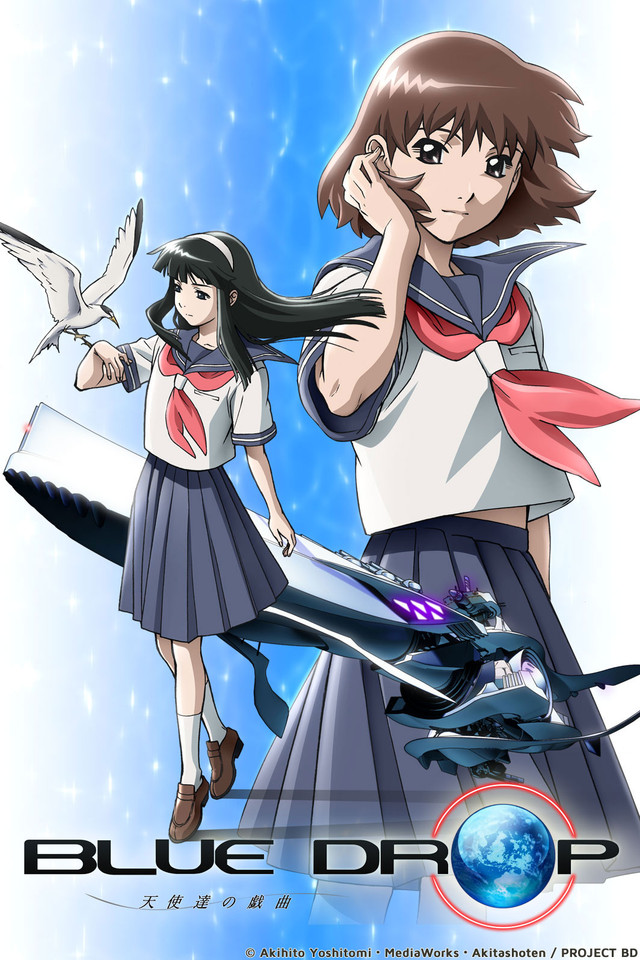 Blue Drop is one that came up as a random pick for me. It’s one that I passed on before but decided to give it a chance on a day that I was just sitting at home.

The manga for Blue Drop is set after the war but the anime takes place before the war. So I guess we can call this a prequel. It’s 1999 and Mari Wakatake transfers into a new school, the all girl school, Kaiho Academy. The issues for Mari start even before she transfers into the new school because all the inhabitants of the island she lived on died, she is the only survivor but has no memories from that event or anything before it.

As Mari is starting to get acquainted with a few people at school but this one girl, Hagino Senkōji, who is always calm, touches Mari’s hand and for some reason she get incensed and starts to strangle her. From that point on Mari is torn between anger and attraction towards Hagino, who acts as if it didn’t happen. What Mari doesn’t know is that Hagino is a major key to the recovery of her memories.

There isn’t too much to say about the show from the production side. It’s a show from a 2007 but it looks like it would fit in more in the 90s. It’s style, music and everything screams that it’s from a generation past. I guess if that’s what they were going for then they nailed it.

I don’t know what to say about Blue Drop because the premise is different from a lot of shows. Not used to this type of show, just watched one or two like Sakura Trick and Yuru Yuri but not because I was looking for them, and once I start something, I usually finish it. Blue Drop is a nice change of pace anime. It may not be one that you put at the top of your list but it’s a decent anime.