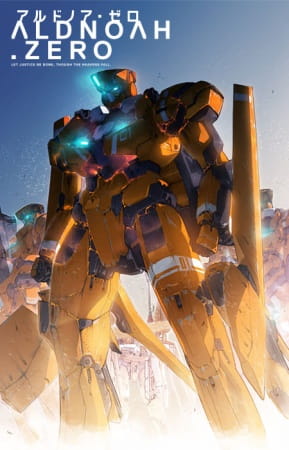 If it’s mecha then I may have seen it once or twice, though I’m sure there is a series or two I missed. Aldnoah Zero falls into that category of being watched a few times. I saw the subbed version and then watched the dubbed first season and of course I couldn’t stop there so I watched the second season again too though it’s not dubbed yet.

So that you have a little back story, on 1972, an ancient alien hypergate was discovered on the moon. Using this hypergate, humanity began to migrate to Mars and settle there. These settlers discovered advanced technologies and claimed Mars and it’s tech for themselves, thus, the Vers Empire is born.

The Vers Empire decided to go to war with Earth in 1999. A battle on the moon’s surface caused the hypergate to explode. This shattered the moon and scattered the remnants into a debris belt. The remnants of the Vers Imperial Army built several massive space stations within the debris belt and a ceasefire was established. 15 years later in 2014, an attack on the Vers princess during a peace mission caused the Vers army to launch a new attack on Earth with the intention of conquering the planet.

The imagery of the show is top notch. From the battles that take place on Earth and those in space, it’s all carefully crafted. If there are any slip ups then I missed them. The opening and ending music are a good fit for the show too. I watched the first season subbed and dubbed and both were done well. They stepped their game up for this one.

Aldnoah Zero gives you just about everything you’d expect from a mecha show and wrapped it up perfectly in 24 episodes, a feat most can’t do or they get cancelled before they can finish. This is one of the few shows that no on can bitch about the dub for since there are no real “westernizations”. Don’t know why people have to bitch anyway when they aren’t Japanese but whatever. Definitely one of the better mecha shows from recent years.