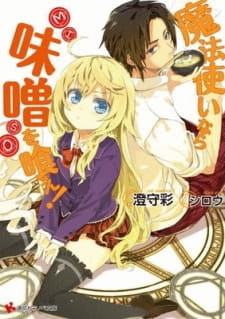 Mahou Tsukai Nara Miso wo Kue! (If You’re a Sorceror, Eat Miso!) is based on a light novel series. Kodansha greenlit this 12 minute OVA for the book that won a few light novel awards. Being that it’s only 12 minutes, there isn’t too much I can say about it without destroying the whole premise.

The story takes place in a world where the existence of magic has been known for over a century, as a power that might rival science. The discovery of MISO (Material of an Impediment to the Sorceror’s Orders) made magic into a technique that can be raised and not just a special power. One day Shoya Hacchoya is in his apartment eating miso soup and a magical princess comes flying through the window. She’s the princess of Majieeru which happens to be the birthplace of magic.

The set up is weird. I guess it would work if it was a show because these few awkward name cards could be the show going to commercial or coming back from commercial. There are 5 name cards, 3 are shown with one of the female characters scadily dressed and doing ecchi like things, the other 2 are one at the end of the show and another in the middle but I guess they didn’t want to use the shy girl for ecchi scenes. Because of all these, it makes it look like a bunch of clips tied together with name cards.

It looks like it would have been your average ecchi show with magic like Sky Wizard’s Academy and a few others. I guess it’s good for a 12 minute OVA but they left it feeling incomplete. Other short OVAs at least give you some type of feeling of closure but this one ended with the introduction of another character like there was more coming. Anyway, it’s only 12 minutes so watch it and maybe you’ll be interested in getting the books since most anime is to sell books anyway.