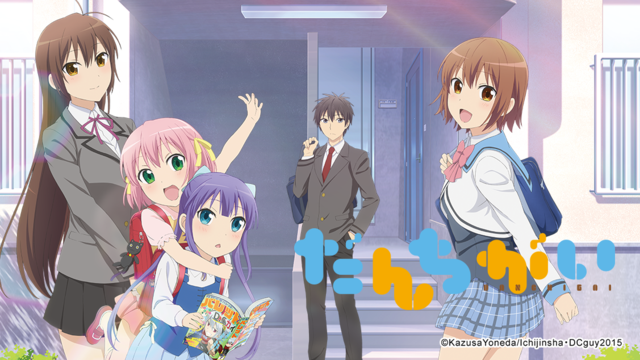 Danchigai is a show from Summer 2015. It’s a short show, where every episode is about 3-4 minutes. It’s about Haruki’s life living with his 4 sisters. 4 sisters who never give him a break, he’s either getting lectured, getting suplexed by his slightly younger sister or having tricks played on him by his little twin sisters. On top of that, his older sister who acts like the mother, shows her vulnerability when it’s only the 2 of them so he has to also there for her sake too.

As you know by now if you’re a current reader of my madness known as a blog, I like the short shows. Not all of them of course but a lot of them. This one is no different and it’s not because they tell a massive story or anything but they’re 3 minutes of entertainment and tell a mini story. It’s hard enough to 20 minute episodes, imagine trying to tell a story in only 3 minutes.

Danchigai isn’t breaking new ground or anything. It’s just a little comedy, slice of life show that’s good for a laugh or two.