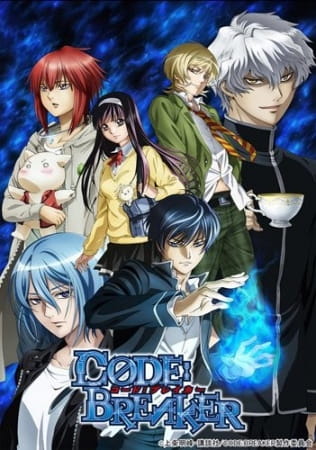 Code Breaker is one from 2012 that I missed. It was probably because one of the characters looks like a glitter boy and I can’t stand that crap. Even the other images have the guys in the show looking like it’s a yaoi show and as we know, I don’t do yaoi at all.

Picture this: you’re riding the bus one day and you look outside the window and there are people being burned alive with blue flames while there’s a guy about your age who’s standing in the middle and not being burned. Well that’s what happened to Sakura, she was on the bus and saw that scene but she wasn’t sure what she saw. Then when she goes to class the next day, there’s a new transfer student. Yes it’s the blue flame guy, Rei Ogami. Rei Ogami is special type of assassin with special powers, a member of a secret organization that actually serves the government.

The characters in the show are a bit ‘different’. Sakura is a typical, nice high school girl who ends up trying to get Rei Ogami to see things differently since he basically sees killing as the means to an end and holds no issue with killing. Sakura is trying to get Rei to ‘have a heart’. Along the way they do meet the rest of the assassins in the group Rei belongs to and they are all much different than he is. A bunch of pretty boys really except for one female. They fit the show well though at first Sakura seems out of place but after a while she really starts to fit in. The crew isn’t much different than characters you would find in this type of show though.

Production value is where this show falters a bit. The music is okay for the show but the art has some weaknesses. I’m not trying to be a stickler but it’s kind of the same thing that is going on with Dragon Ball Super right now. There are some inconsistencies in several places but they aren’t as blatant here as they are in Dragon Ball Super.

This is another show that I feel should have gotten more attention. Code: Breaker follows the usual trappings of this genre but it does have a different feel to it. Fans of this show will probably like Zettai  Karen Children: The Unlimited and Darker than Black also. If you like madmen trying to take over the world and supernatural powers then check it out.