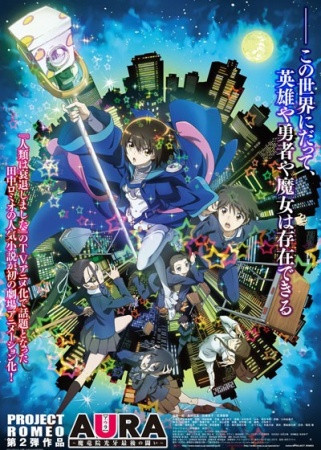 A kid named Ichirou Satou used to call himself ‘Koga Maryuin’ and went around like he was a hero in a fantasy world. His actions caused him to get bullied and made him have to leave school. Some time has passed and he’s at a new school as a ‘normal’ boy but the past beckons him as he meets a girl who cosplays in a blue cape. She calls herself a researcher who is travelling from another world to search for something called the ‘Dragon Terminal’. This girl tries to recruit Ichirou to be her assistant.

Ichirou rejects her but she keeps pushing and he just can’t flat out tell her no even though he’s trying to escape his former self and be ‘normal’. He sees himself, in her and maybe that’s why he can’t completely say no. Then one day, at school, he sees her getting the same treatment that he did so he goes along with her requests. This leads them down a road that neither of them could have seen coming.

I can’t really say too much more without blowing up the plot of the movie but this was a very enjoyable watch. I would say the production value is on the higher end but not upper echelon and it doesn’t need to be to tell this story. The story is tight and has very little empty space, it’s pretty much all story and no filler. You get a story of two teens becoming friends, fighting bullying and seeking acceptance, maybe even a bit of a love story without the actual sealing of the relationship.

The dubbed version of this is also well done. Everything about the show is tight and you won’t be disappointed. You may not have been the kid with issues making friends and living a fantasy but you probably know a kid like that or had one around you. The show doesn’t add in unnecessary details to make it more ‘fantastic’, it’s a realistic approach to the subject. Definitely something I’d put on my list if this is the type of show you’re looking for. Another show that would be of interest to you if you like this one is Love, Chunibyo & Other Delusions.