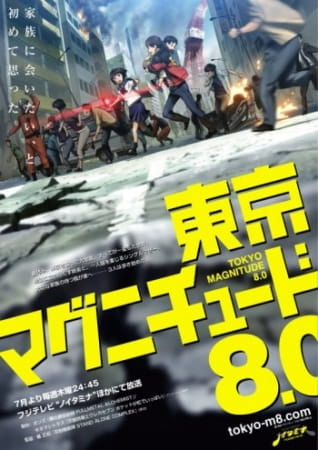 The show is based on the premise that there is a 70% possibility of a magnitude 7 earthquake in Japan in the next 30 years or so. It depicts what it could be like in Tokyo if that were to occur.

The story revolves around Mirai, a middle school girl who takes her little brother Yuuki to Tokyo’s artificial Odaiba Island for a robot exhibition. It started out as a simple summer vacation trip but wound up being a lot more than just that. A powerful earthquake hits and destroys Rainbow Bridge, takes down Tokyo Tower and other places around Tokyo end up completely devastated. In Odaiba, they meet a motorcycle delivery person named Mari. Upon learning that they live near one another and they form a pact to get back to the western Tokyo together.

The production value of the show is somewhere in the middle. It’s a show that doesn’t need to have slick art and doesn’t have it either. That’s not to say the artwork is bad because it’s not. It’s just kind of ordinary but it’s solid through the whole show. Everything else around the show is tight though. I can see why they wouldn’t go all in with a budget. Drama shows don’t do all that well so why spend a ton of cash to get the imagery across, especially when you don’t need to.

This show is a drama so don’t expect it to move fast. There’s no way to tell how people will react to natural disasters but this show is pretty much like every disaster movie out there. This show is another one that can be seen as a gateway anime which you can show to anyone and you won’t have to explain harems, ecchi, etc. Tokyo Magnitude is a very straight forward show which follows people and the way they manage to get through a disaster. Though since it is an anime, there is a twist in the plot.

Why did I give it a 5? Because it’s a very clean show from start to end and can be enjoyed by just about anyone. It’s only 11 episodes so it’s not much longer than your typical disaster movie that usually clocks in well over 2 hours.