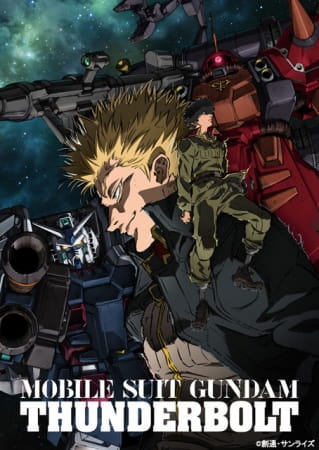 By now, most of you reading my ramblings have heard about or seen Thunderbolt. It looks like it’s going to be a 4 episode ONA type thing created by Sunrise. To run another Gundam while Iron Blooded Orphans is still on does seem a bit odd but it’s what they’re doing. I’m not sure how often the episodes will be released but will check on that. Each episode will be available for online purchase after airing. No other plans have been announced for the series yet but I’d love to see this expanded on because after that first episode, it doesn’t seem like enough to tell a full story. Maybe it’s an ONA to get funding for a full season.

While it’s a web animation, it’s very cleanly drawn and animated. Everything in the show is hand drawn, no CGI or fancy ass tricks. The first episode is 15 minutes of engaging art, a great jazz soundtrack and lots of brutality. Definitely an old school Gundam feel to this show. If you’re a Gundam fan then to place where it is in the timeline, it’s part of the ‘Universal Century’ during the ‘One Year War’.  I know I’m waiting for the next episode, you probably will be too after watching this.