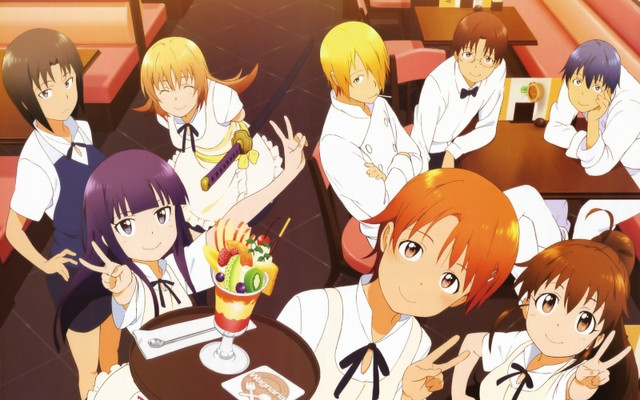 If you saw the previews for Lord of the Takanashi then you were probably expecting something more like a fantasy show right? Well it’s not that but the show is still as good as the rest of the series has been.

Unfortunately this marks the finale of a very good show. 3 cours these days is like an eternity for a show, most are lucky to even get to 2. Whether it’s sales of DVDs or toys, something usually keeps a show from being more long term. Season 1 obviously set the stage for the later seasons. Takanashi was brought into the fold by Popura and they started to form bonds with each other. Season 2 saw Takanashi become like the center of the restaurant even though he was not the manager and you started to see one romance which had been hinted at, grow. Season 3 brought another romance that probably was expected, Takanashi and Inami. That romance was the basis for Lord of the Takanashi.

Without blowing up the plot too much, Lord of the Takanashi is a quest by Takanashi to defeat the one true big evil in his life. His mother. In season 3 it was hinted that his mother was finally coming home and his family and anyone who knew her showed fear. As the “final boss”, his mother stood in the way of his romance which he was still unsure about himself. The show doesn’t solely focus on Takanashi and Inami though. The side plots and relationships do get some time to bloom too. It was enough to bring closure to the series. Since it’s runtime was over 45 minutes, it’s like 2 episodes in one to tie up some loose ends.

So while this is the end of the road for Working!!! It’s one of the few shows that gets a proper send off. Season 3 was different from the first 2 seasons since they started to involve love but it still held up in the end and the finale helped seal the deal on that part. Without the finale then season 3 would have probably been a flop. I’m not going to say it was perfect but it was well done.