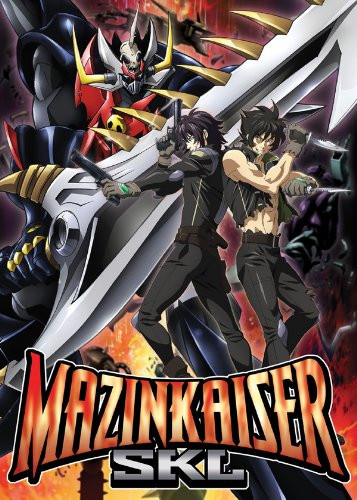 Mazinkaizer is a 3 part OVA so they do leave out a little background and drop you right into the action. There are 3 factions fighting for dominance of Machine Island, where all 3 are currently occupying. It’s an island prison that is isolated from the rest of the world. To make sure of this fact, a “Gravity Prison” was formed and only machines created by the worldwide government can enter the area. The 3 factions are allowed to use the resources of the island to create robots and machinery for their armies.

Where the show kicks in is where there are 66 hours left to prevent the Gravity Prison from exploding. The Gravity Prison is in an unstable state and will explode, destroying the Earth and human life. Each if the 3 factions controls part of the mechanism that controls the Prison. The WSO, knowing the danger of the Prison remaining in it’s current state sends in the Skull Force. Skull Force has 2 squads and one of those squads is a 2 member unit known as the Death Caprice Squad and they pilot a Mazinger known as Mazinkaizer SKL.

While the show was released in 2011, they gave it an old school feel and look. Something that they’ve been doing with a lot of the grittier shows lately like Parasyte, Black Lagoon and others. The soundtrack is metal and so is the attitude of the show. It’s subtitled but you get a lot of F words. They really took their time putting this together.

If you live in the US then you probably remember TransorZ which is based on Mazinger but censored to hell. It was one of my favorites in the 80s as a kid so my opinion may be biased on that point though I do think this is a very strong show. If you want a badass mecha show that is full of attitude then this is the one for you. It’s a shame it’s only a 3 part OVA. There is a version that was smashed into a movie so you can enjoy it that way too. It’s about 81 minutes in total of nonstop action.