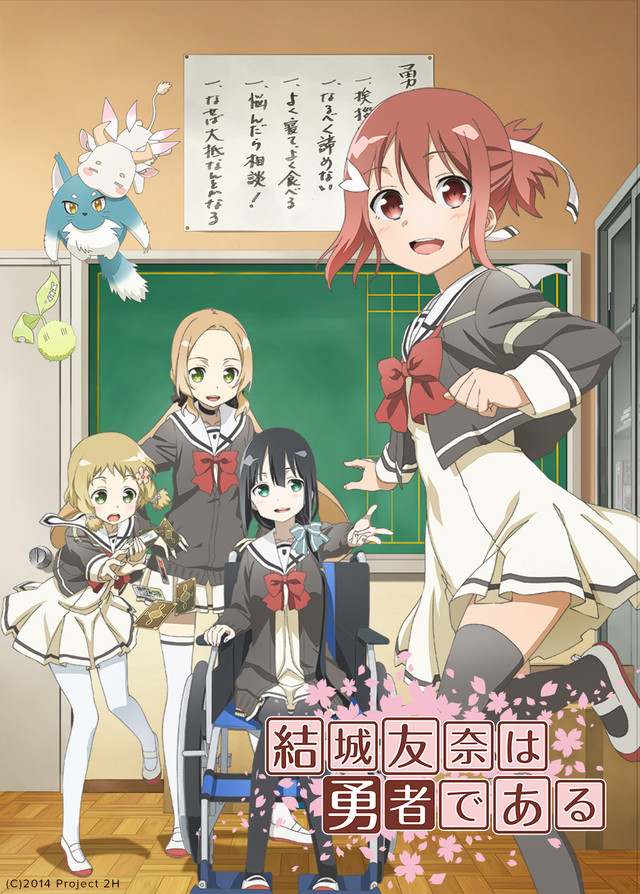 The cover art is so misleading on this show. While they are schoolgirls, there is a lot more to this show than that. The story takes place in Shikoku, an island of Japan in the distant future. Though if you read previews you will notice it says the year 300 but it’s in another era. Yuna and her friends Mimori, Fu and Itsuki are members of a ‘Hero Club’ at Sanshu Middle School where they help people with small tasks like finding cats, etc. One day the Hero Club is caught in a burst of light and transported to a forest where they encounter these creatures called Vertex which are out to destroy the Shinju, a deity that protects humanity. Yuna and her friends are transformed into magical girl heroes to save the Shinju and the world. But there is more to the story than that so, tune in.

This is what the cover art probably should have been. This gives you more of an idea what the majority of the show is and doesn’t have you click it off as a moe show.

The show is colorful but not as colorful as the cover art would lead you to believe. The color is more of a washed pastel look than a bright colorful look and it fits the show well. The show is nicely put together like most recent anime. It isn’t the highest of the high production value shows but they do a decent job. The characters are kind of similar to each other but there is one in a wheelchair which you rarely see in something like a hero show. Hell, it’s rare in general. Here’s where someone will say, she’s in the manga blah blah blah…yeah anyway.

Yuki Yuna is a Hero was definitely not what I expected at all. I saw the coverart and was thinking “how can these little girls be heroes?” “Do they have superpowers?” So I watched it out of curiosity and it’s not a bad show. I don’t know if I’d recommend it to anyone unless it was their genre of choice but it’s an okay show and who knows, you might enjoy it. The show is 12 episodes so it’s only about 4 hours of your time.