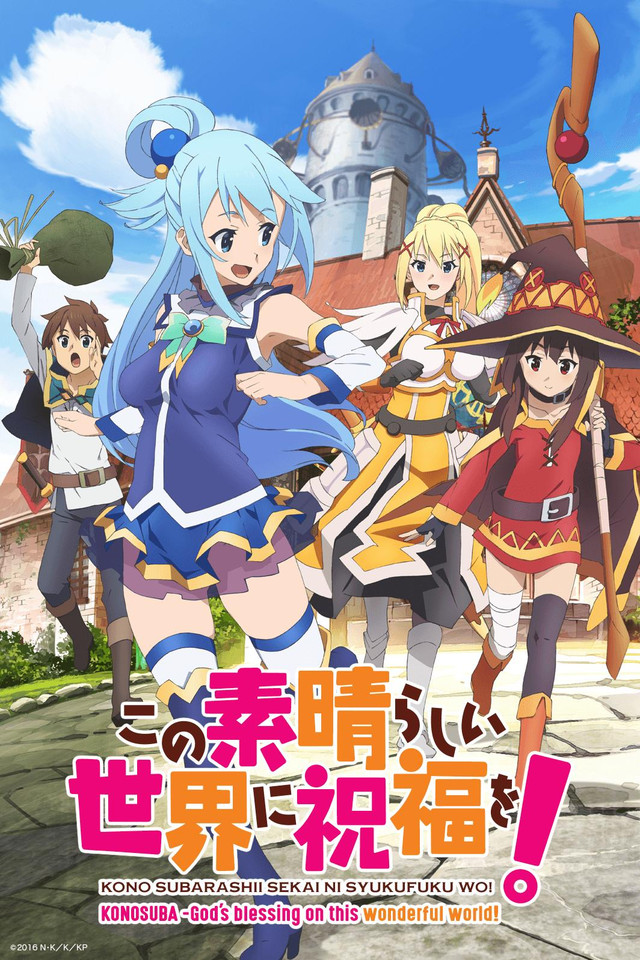 Konosuba is a show that I was going to pass on but I started watching. Was not impressed at first but the show kind of grows on you. And it seriously grew on Japan because it started getting the top rank in Japanese polls after a few weeks.

Satou is a hikikomori who’s life came to an end in a traffic accident. At least that’s what he thought but he woke up in front of a girl who called herself a goddess. She offers him the chance to go to another world but he can only take one thing with him. He couldn’t think of anything so he answered by saying he’d take HER. And so the journey begins, an adventure where the reborn Satou and the goddess must now slay the Demon King.

The characters are what makes this show enjoyable or at least good for a few laughs. Satou is just a hikikomori with no skills, no money and no place to call home. With him, he has Aqua “the goddess”. What Satou doesn’t realize is that his goddess is going to be the cause of a LOT of trouble for him. Along the way, they meet others who try to get Satou to let them join the party but the characters who come are the ones you usually pick last for dodgeball. There’s Darkness, a masochistic knight who has a great deal of loyalty but always tries to get punished and Megumin who is a wizard who only knows one spell that usually goes wrong and leaves her motionless, so after casting it, Satou usually has to carry her to their next stop. The party is always looking for jobs to make money, upgrade their living arrangements, etc but they always end up owing money too. So it’ a band of useless characters who become the target for the Demon King.

The show is not groundbreaking in terms of production or anything but it doesn’t need to be. The show doesn’t try to be anything that it’s not. Konosuba is a silly comedy and that’s all t tries to be and they got it right. The art is pedestrian in most cases, the music is okay but besides that there is nothing to really complement the show on except it’s premise and the silliness of the show.

Like I said, I was going to pass on the show but it grew on me. I won’t say it’s a recommendation but if you want something silly and funny and doesn’t take itself seriously then check this out. Didn’t realize that Konosuba was only slated for 10 episodes but at the end we got a little surprise. There will be a 2nd season. It’s a goofy show which was good for a few laughs and I liked it. Not as much as a Death Note or anything but I still liked it for what it was.