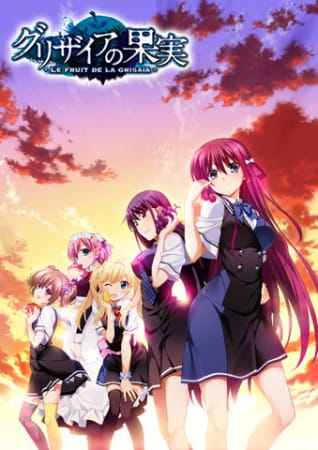 So I finally decided to watch the Grisaia trilogy again. Well it’s not truly a trilogy since it’s a 13 episode first season, a 45 minute movie and then a 10 episode second season. That movie could have been chopped into a few episodes and merged into the second season. Let’s get into it.

The Fruit of Grisaia/Gurizaia no Kajitsu starts out like a typical harem anime. You meet the guy and some of the girls and the others stat coming into the picture. This first season follows Yuuji and his integration nto an all girls academy. Along the way he meets some really odd girls who each have their own issues. Yuuji’s mission is to help the girls with their issues which of course leads to forming bonds and getting him to break out of his own shell. If you’re only looking for your typical harem anime then you will want to stop here, the rest of the series takes a more serious turn though t still has comedy since comedy is part of the harem formula.

The Labyrinth of Grisaia/Grisaia no Meikyuu is a 45 minute movie that takes place about a year after the first series and we find Yuuji trying to get a promotion in his organization. Still not sure who they really are though. This gives a look into Yuuji’s background and how he became a handyman/assassin or whatever his classification is supposed to be. This was an hour long and it has incest, rape, shotacon/lolicon sickos and other mature topics…There is an uncensored version which may cut out that crap but I watched uncensored. Wasn’t expecting any of that.

The second season The Eden of Grisaia/Grisaia no Rakuen, went in a much different direction from the first. It’s a continuation of Meikyuu, starting from Yuuji’s history again. I don’t want to give away the whole plot but the girls learn more about Yuuji and try to find a way to help him get past his past like he did for them. You still have one or two mature moments but not as much as Meikyuu.

It’s a good looking show with decent music. The ecchi is just ecchi for the sake of being ecchi. There’s only so many times you can watch someone fall on her face and her skirt goes up. It doesn’t take away or add to the show in any way.

If you just want a simple harem show then watch the first season and you should be satisfied though they do leave you with a hint that more is coming.  If you want more than simple harem with mystery, intrigue and espionage then watch everything. The first season, the movie and the second season.