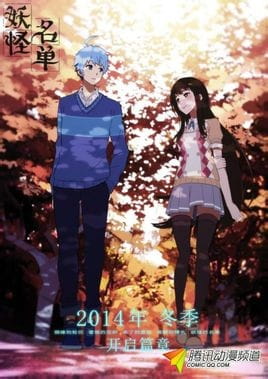 Monster List is an anime out of China. It’s in the same format as Cupid’s Chocolate where every episode is about 12 minutes. I assume that’s a thing for them. I have not done much research into China’s anime scene.

A foxy tempress, a tree demon, a girl with goddess powers and one guy in between them. Feng Xi would be the unwitting hero of this story. Drawn into situation after situation with these girls, he learns to adjust to his new life. One where he must preserve the peace and seemingly save the world at the same time.

Like with all the Chinese anime that’s getting out recently, it has less frames than what you’re used to and of course it’s in Chinese. But China has stepped up their animation from what it used to be.

Due to it being from China, I can’t find much info on it. After episode 12 or 13 it goes into a new story with new characters. That new part is kind of bland if you ask me. The first part is okay but I’m guessing the change in stories is a new season or something. Don’t run to go see it but China seems to be making stuff of better quality.