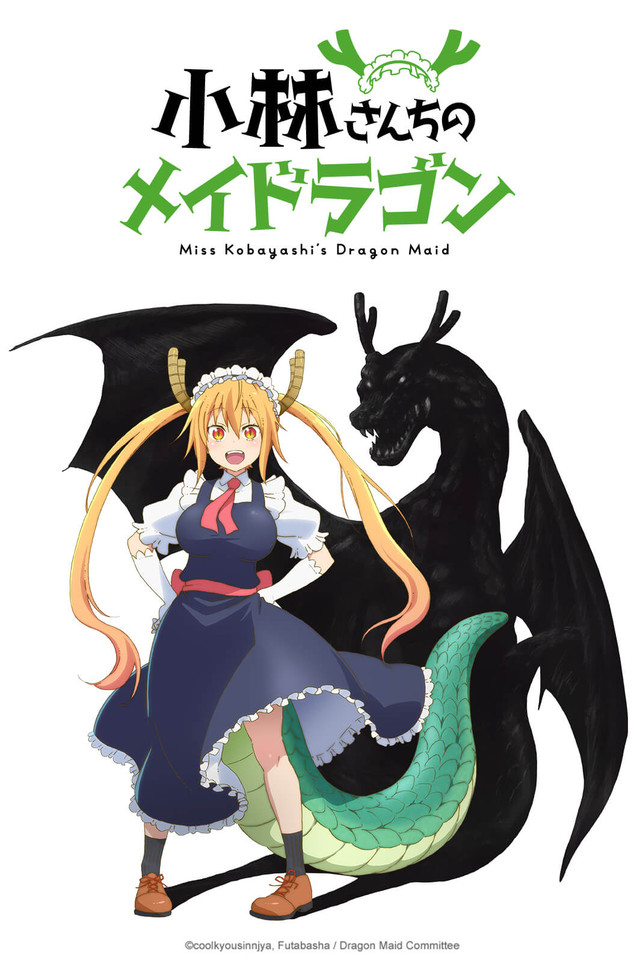 I know the blog has been neglected so here’s my attempt to get it going again. This winter season is okay but there are some that are just off my radar. Been waiting to see what gets done with Maid Dragon and it landed at KyoAni so that made it bound to be good. KyoAni always delivers and they did with this one too.

Gabriel Dropout – It’s a goofy comedy that works for what it is. It doesn’t pretend to be more than a goofy comedy. You have angels and demons trying to live on Earth and none of them act like you’d expect. You have a sadistic angel, a slacker angel, a nice demon and a demon who are friends to a degree, going to school and trying to understand living on Earth. Gabriel reminds me of Umaru so that’s a negative and I could live without this one bathroom scene but it’s just a show to make you laugh at the goofy situations.

Maid Dragon – I read all of Cool’s manga and this is one I’ve been waiting for and to me it’s the best of the season. It even looks just like Cool’s drawings but on TV. I didn’t know what to expect but they got all the characters dead on which you can almost always expect from KyoAni. It’s about a boring IT worker who stumbles on a dragon in the forest during a drunken bender. She invites her to her home and the dragon decides to become her maid. I feel if this show was with a different studio then they might not have done it justice. And Tohru is just a great character in general. I expected her to be a bit more fiery but they made her like a super cute character with a moe look. Her actions, naivety and humor come out even more when you see it in action. I hope the rest of the season is just as good. Everything so far has been perfect. There is no episode count yet but it’s probably 13 since Cool doesn’t have many chapters of this done. This is also being dubbed.

Gintama – I didn’t watch the other 300+ episodes. So far it seems okay I guess but I feel like I’m missing something since I don’t know the background.

Chiruran Nibun no Ichi – A short from this season about a bunch of samurai. The problem is that each episode seems like introductions to characters. So let’s say you basically introduce characters and their personalities for 12 mini episodes. Then what? It’s not like Bikini Warriors or something where they actually had quests and all that. Not sure where they plan to go with this one.

Fuuka – More of a shoujo romcom but not bad. I do watch but it’s one of those “it’s okay”…

Seiren – This show is similar to Amagami SS where the guy goes out with 3-4 girls over the course of a season. Basically each girl gets a few episodes and either it works out or it doesn’t. It’s a visual novel in animated form.

Hand Shakers – Painful. Quadruple root canal with no Novocaine painful. The CGI is all over the place which makes the colors hard on the eyes. The story and premise is weak too but that can be a bad interpretation of the source material or the source is just weak. I haven’t read it but the show is just not looking good at all. Getting dropped like a hot potato.

ACCA 13 – I don’t know what it is but something with this show is just not clicking with me. Might watch when I have time or drop it. Not sure. This type of show would usually draw me in but like Joker Game, something just isn’t clicking. Most likely drop.

Interview with Monster Girls – Liking this one. It’s a slice of life vs an ecchi comedy like Monster Musume. Still funny but in a more relaxed way. There is a teacher who always wanted to interview monster girls and then he finds a few right in the school he’s working at. The show is about their lifestyles and their relationship with him as being one of the few people who wants to understand them. The dub is out and I think they nailed the performance. Definitely one of the best of the season.

Akiba’s Trip – It’s more like Akiba Strip for those who don’t know. It’s a goofy comedy about aliens who have to be stripped to lose their powers. The show is okay I guess. Characters are kind of typical except one named Arisa. She manages to make me laugh most of the time she talks. She’s not too bright and always say ‘moi’ which means hello in Finnish. She also seems to be in some form of cosplay every episode and more than one outfit. I’m watching the dub but have watched the sub too. This show is being shown dubbed 30 mins after the sub though they fell a week behind.

Chaos;Child – Don’t think it’s as bad as Chaos;Head because it’s not. They started the season was an episode 0 which was a cram school session of Chaos;Head and that made things more confusing since it was different from the actual show. The show has to do with the previous season and it’s main premise but it’s more of trying to figure it out while a new case is occuring. It’s an okay show…

Konosuba 2 – More of the same goofy comedy in another world. New characters, more explosions, more of scumbag Kazuma and more of the useless goddess Aqua. There was no doubt that I was going to watch this one.

Chain Chronicles – Typical RPG type show but this one is actually decent. Phantasy Star was a flop but this one doesn’t use school as a backdrop or anything like that. It’s action from the jump and keeps it going.

Schoolgirl Strikers – Another show based on a game. It’s eh… It’s like moe mecha. So far nothing has made it stand out in any way.

Blue Exorcist 2 – Yes. Watch it dammit. It’s more of the same from the 1st season and speaking of that. The first episode actually starts after episode 16 or so from the first season. Everything after that was a “filler” arc not from the manga. Either way, I’m watching it.

Spiritpact – The entry from China that airs in anime blocks. It’s bad. So bad. So so bad. I’m basically watching it to see just how bad it gets.

Youjo Senki – The look alone turns me off but I watched the show. The main character is 10 and a war witch. Yeah I’m serious. She looks like a demented teddy bear or something with those ridiculous eyelashes and her lieutenant is another young girl who looks like a potato eye with big droopy eyes. Everyone else looks normal and looks good but those 2 really just make it hard to take the show seriously enough to watch.

Tales of Zestiria 2 – Not watching. Not because it’s bad or anything but the first season for some reason had me tune out after like 5 episodes. I’ll probably catch up on it after the season in a long marathon run but for now I’m not watching.

Ai Mai Mii – A gag comedy short which had previous seasons which weren’t bad but this one is bad. Drop drop dropity drop.

Nobunga no Shinobi – Another gag comedy short continues from last season. It’s eh… Since it’s 2 minutes or so I watch but not anything to write home about.

Koro Sensei Quest – Shorts based on Assassination Classroom. It’s like an RPG style show but the comedy in this is not hitting like in the regular show. Stopped watching but maybe after the season I’ll watch it.

Masamune-kun no Revenge – When the dumpy kid gets dumped by an ice queen, he’s going to want revenge right? Well that dumpy kid became “the hot guy” and now he’s back to get revenge and his plan isn’t working out right but at least it’s somewhat entertaining.

Zaregoto – It’s one of those locked on an island shows. Of course if you get stuck on an island someone has to die. It’s only some weird schedule and only like 5-6 episodes I believe. Comes out like every 3 weeks to a month so I end up watching the previous episode to keep track before the new one. I like the show but since it’s by Shaft and has Bakemonogatari stylings that was probably a given.

All-Out! – Continuing from last season. I left off at like episode 9 but it’s going 25. Wasn’t a bad show but just got sidetracked and never got back into it. It’s a show about rugby and a guy who doesn’t know a thing about it joins the team. It’s his journey to becoming a player.

One Room – This show is kind of creepy. It’s like a voyueristic show with young girls. They go to this room and mystery person is never seen. I stopped watching because it feels like a stalker inviting young girls to his room.

Piace: Watasi no Italian – This is a short about a girl who gets a job at an Italian place and knows nothing about Italian cuisine. Supposed to be funny but it’s kind of dry.

Twin Star Exorcists – continuing show going 50 episodes. It’s in it’s final stretch but I have not been keeping up. Think I left off at like 25 and it’s now up to like 42. It’s one of those okay shows that you drop or keep watching but don’t care if you miss it.