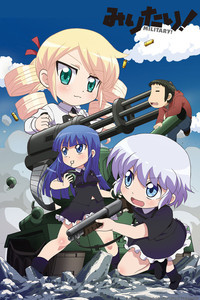 Military! is a 12 episode anime based around a trigger happy little girl who appears to be under 10 years old. Yet she happens to be a member of the Krakozhia Dukedom Special Forces and is a 1st Lieutenant on top of that. Her and her 2nd Lieutenant are tasked with the job of protecting a teenager named Souhei. They basically invade his house, protect him from assassins and blow up everything.