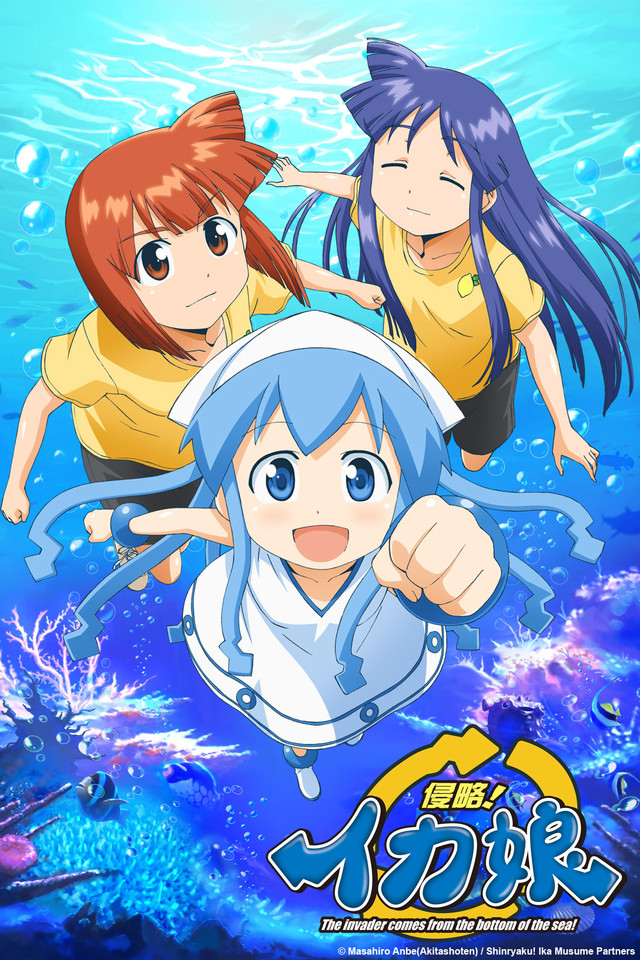 Squid Girl is a girl from the ocean who happens to have tentacles for hair. She came to invade the land and get revenge for the inhabitants of the sea, for all the pollution over the years. Her first goal is to take over a beach side restaurant so she has a base of operations but she doesn’t find it that easy to carry out her plans.

This is where Squid Girl meets the Aizawa sisters, Eiko and Chizuru. They’re the other main characters of the show as you can pretty much tell by the picture to the left. Squid Girl runs into Eiko as she tries to “terrorize” the restaurant. She tries to show what she can do with her tentacles, while trying to swat a mosquito, and ends up breaking a hole in the restaurant wall. This incident causes Eiko to enlist her as a waitress to pay off the debt. This begins Squid Girl’s life on land, learning new things and becoming a part of the human civilization.

Squid Girl is an enigma and she finds out more and more about herself as the show goes on. She seems to be around 12-15 years old but an age is never given. She is very gullible and doesn’t seem intelligent though she is great at math. Her tentacles are a big part of her character, as a waitress she uses all 10 and when she swims or plays sports she uses them too. Her hands are not as adept to being used as her tentacles are. She also has what looks like a hat but it’s part of her head and her fins and it brings her severe pain if something happens to it. She also uses words like squid, tentacle and ink in something that’s like a combination of the Smurfs and Ned Flanders. In season 2 she uses it a lot more. “What the squid is this?” “Are you squidding me?” “What do you ink this is?”. She’s not your usual character which is what makes her kind of refreshing BUT the rest of the cast is too stereotyped.

Eiko and Chizuru are sisters and they help carry the show but the side characters seem to mostly be there for sight gags and nothing more. Well there is Takeru, the little brother who Squid Girl hangs out with a lot too. Beyond those characters, others pop in here and there and leave a bit of themselves in your mind but they really are side characters. The show ends up being more about a family unit and Squid Girl learning her way around.

In both seasons, the art is okay in this show, nothing spectacular but you can see where they cut corners. It’s a family friendly show for the most part so that doesn’t matter too much. The sound and music all fit the show well except for the OVAs. I feel the OVAs themes just don’t fit. They’re still nice and airy but seems like they may have tried too hard.

Overall, Squid Girl is a decent show. It’s not a must see but if you let her squid-vade your TV screen, you won’t squiddin rip your eyes out.