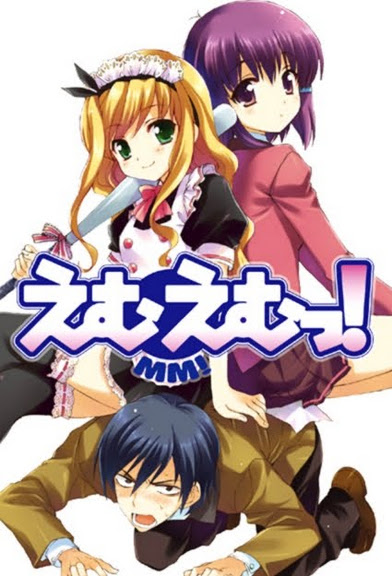 Where to begin with MM! Taro is a masochist who goes to high school with an odd collection of people. He falls in love with this girl and he wants to be cured of his masochism so he can confess his love to her. His best friend Tatsukichi points him in the direction of the Second Voluntary Club to help with his problem.

The Second Voluntary Club is where Taro meets the others who will help him to cure his issue. There’s a self proclaimed goddess who is the leader of the club, a girl with androphobia who is the reason he’s a masochist, a cross dresser who happens to be his best friend and the girl that Taro is in love with, the school nurse who is the club advisor and gets the girls to do cosplay so she can take pictures and others who will become part of Taro’s journey.

The characters are really the only thing that stand out in this show because they are really over the top and really into their different issues. To say anything about the characters pretty much gives big parts of the show away, that’s how centered around the characters it is. For example, Taro is a masochist of the highest order, they put him through the ringer and he keeps coming back for more, over and over to the point where you might actually feel sorry for him, like literally. Then you have Yuno who is androphobic and anyone who has seen someone who is androphobic in anime, what is the one thing they always do? They always hit a man as violently as possible when they get near.

The show doesn’t have much to really say about it. It’s about “curing” someone of masochism. At least he’s a decent character but the “story” just isn’t there. You don’t even get the guy who you want to get the girl feeling and that’s what is the subplot. There are points where you’re sitting there saying “why does he want you anyway.” It’s just a mess. It has it’s funny moments like some of the S&M scenes or when Taro actually does a Kamehameha wave but the show doesn’t have enough funny to keep you laughing. I guess if you’re into lame jokes you’ll laugh. I know a few people like that who can laugh at anything.

The art, the music are blah. I guess I’ll say the art is pretty good for what it is. It’s mostly a school setting so not much needs to go into that. The other settings around town are done well so it does have art going for it.

MM! is something you watch if you’re bored, I can’t recommend this show to anyone. Maybe it’s good for a cheap laugh or two but that’s really it.