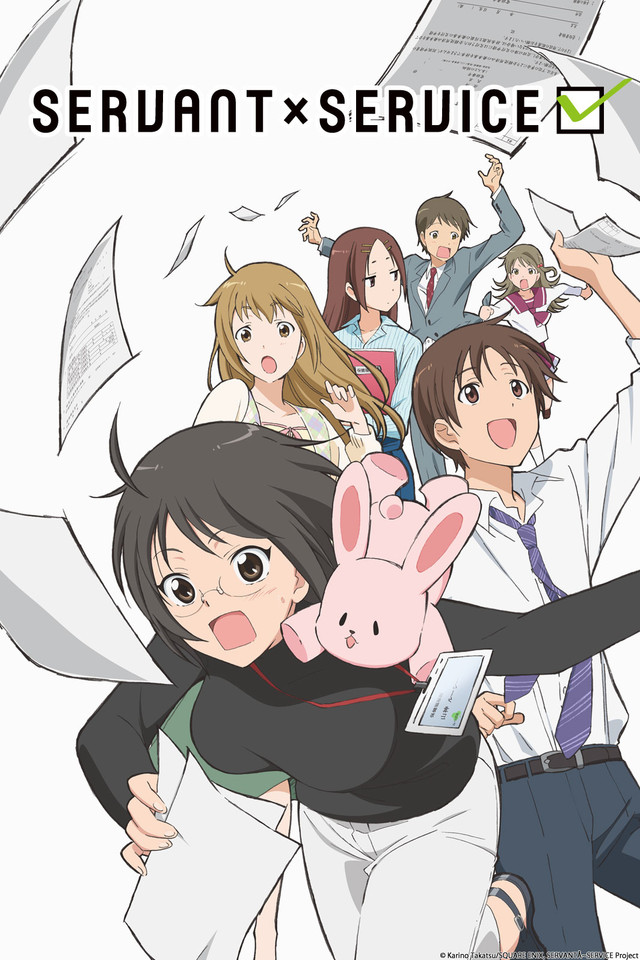 Servant x Service is an office based, workplace comedy anime. It’s a light hearted comedy centered around a workplace with an oddball cast. Don’t expect them to go on an epic quest, discover the holy grail or anything like that. It’s just straight comedy and romance with one little subplot.

The characters are an odd blend of kind of funny and kind of not funny. You always have your straight man but they are usually funny in some way. Here, they really aren’t. In this show, all the females have the personality and the guys are a guy who seems to goof off though he does know what he’s doing and a guy who gets stepped on. You also have a boss who is inside a stuffed rabbit. So it has the odd collection of characters down but something lacks in some of them. Just not sure what it is.

The show has decent artwork, there’s not much needed for a show that barely leaves the office. The music for the show is something light and fitting. Everything around the show was done well while keeping the focus in the one place they want it to be, on the characters. The one mini plot is carried through the whole show so you do have that on top of everything else.

Servant x Service doesn’t break new ground or change the very fabric of reality but if you want a show that has a little comedy while not being overly drawn out then this is for you. The show does fall pray to one issue that these workplace shows have. There is no real progression except the main character and you start to know what’s coming when it comes to jokes. But it is a decent little show. Just wish they took things a step further, especially since the same mangaka wrote Working which is a funny show.