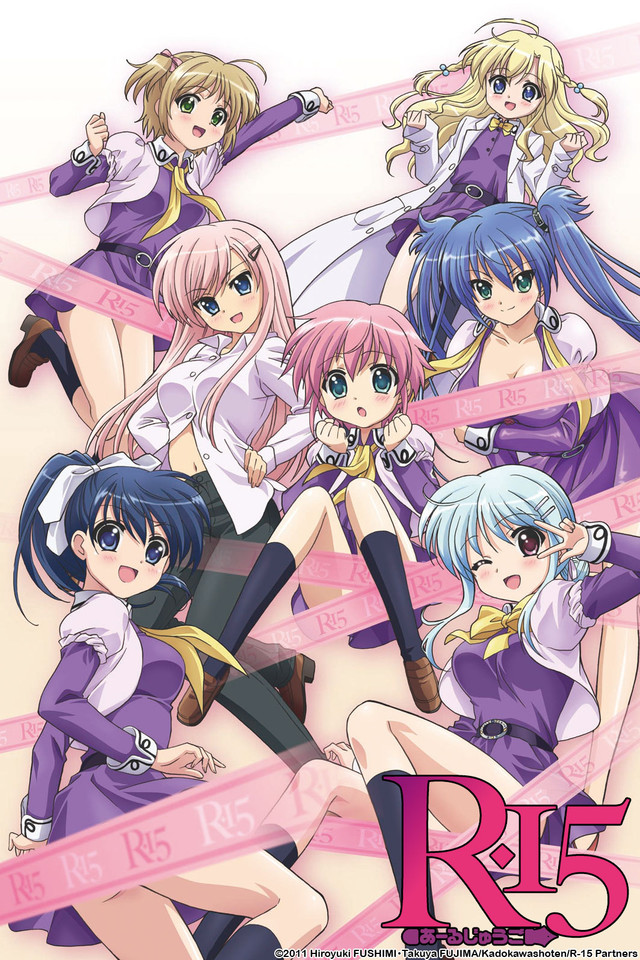 I came across R15 as a link from another anime on Crunchyroll. I didn’t know what to expect with this one, it’s called R15 and has girls on the cover. That’s about all I knew but since it was a recommendation because something I watched, I just picked it. Recommendations are not always logically picked. There is one thing I can say about this show and that’s…the ecchi, oh the ecchi, oh my God the ecchi.

R15 is about a specialized school with students who excel at what they do, basically a school for geniuses. Taketo Akutagawa is the main protagonist and he’s a genius writer with a specialty in erotica. Everyone knows about it and the girls treat him like he has a disease or something. He also works on the newspaper staff as a reporter and interviewer which is where he comes across some of the girls. Raika Meiki is a photographer for the newspaper and she is always trying to get Taketo in awkward situations to take pictures, including with her.

I started watching the show on Crunchyroll but kept getting an error on the 2nd episode so I switched to Kiss Anime for that episode and let me tell you…there is a HUGE difference. Those light bars on Crunchyroll are hiding a LOT. I’ve accepted that ecchi is part of the Japanese culture and if it’s not just a show based on that then it’s fine by me. I try to take in the whole show including the ecchi and if it works then it works. Then you have cases like Eiken which is just bad in every sense of the word. This show is soooo ecchi but it kind of goes with Taketo’s expertise. He doesn’t seem to be the usual perverted teenager so that give and take, kind of helps.

It’s an okay show but nothing to write home about. Okay art, nothing special. I guess it has a plot if you can call it that, the usual harem plot. If you’re looking for ecchi then it’s your show.