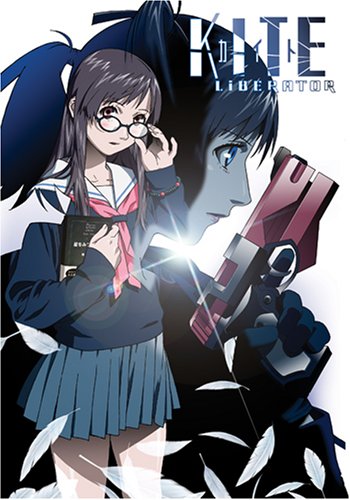 Kite Liberator is set 10 years after the original Kite, it’s also a 50 minute OVA. This sequel isn’t about just introducing the characters or murders like the first one. This one goes in a much different direction but just as dark.

The story revolves around another high school girl named Monaka, she’s clumsy, works a late night job, you wouldn’t think of her as an assassin. The problem here is where the story goes. You have the usual assassins but then there are space scenes and even something that we’ll call an alien for now. It really just goes off on some weird tangent.

It’s definitely a step up in terms of art. The original Kite was just abysmal when it came to art, especially the faces. Other parts of the show like backgrounds were done well though and the same holds true here. The character art here is light years ahead of the original.

I just can’t recommend this one either. They didn’t even finish the show, it ends mid fight. Then there’s no part 3 to continue the story. Because the art and everything is better, I give it an extra 1/2 star over the first Kite but come on…can’t even finish the story?