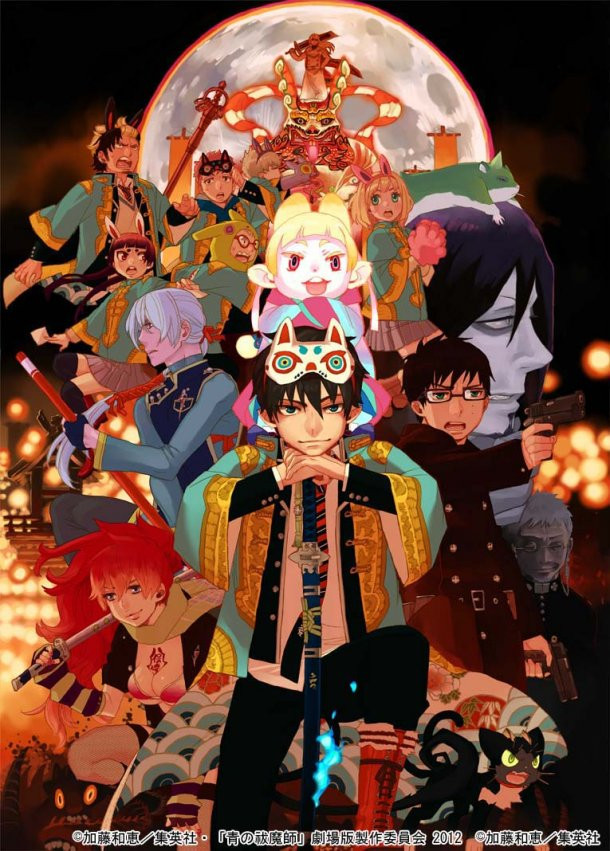 Blue Exorcist is a very good series, in my opinion. Shortly after the series ended, they greenlit this movie and a few OVAs which were included with the DVDs. This movie maintains the same art style and characteristics of the series.

This is set some time in the future when compared to the series. It looks like it might be right after where the series left off. True Cross Academy Town is preparing for a celebration that takes place every 11 years but a “Phantom Train” has gone berzerk while the barriers protecting the town are under repair. Rin, Yukio and Shiemi are on the scene to excise the train but as usual Rin makes it much more of a job than it needs to be.

To make things even more complicated, Rin finds a demon child, one that he doesn’t want to excise right away like he’s supposed to. He actually gets kind of attached to the little guy. This sets off a number of events since he is going against his training and against the Upper First Class Exorcist from the Taiwan Branch who is a strict by the books kind of exorcist.

Rin, Yukio and Shiemi are here as the main protagonists along with the whole cast of characters from the series. Shura is here as a secondary but the rest of the students are kind of comedy relief. This is a story where Rin gets to shine, not that he doesn’t in the series but the main focus is almost solely on him.

I can’t say that the movie is as good as the series but it keeps the same feel. Definitely a strong showing and follows the same line as the series. It’s more of the story based plotline and not the action part of the show. There is action but not as much as when it got hot and heavy in the series. I’m giving it 4 stars and say watch the Blue Exorcist series then watch the movie so you know what’s going on.