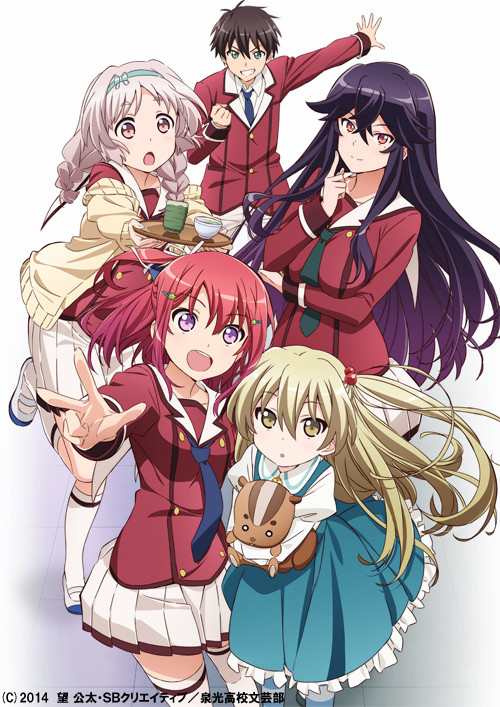 I kept waiting for those supernatural battles and well…they never came.

Somehow a bunch of students have gained superpowers (this was not explained). Jurai and the rest of the literary club, plus 2 others come into superpowers and they are just learning about them and learning how to use them. The show circles around them learning and coping with their powers and trying to also maintain some sense of normalcy.

The characters are typical high school kids trying to go through high school things while having superpowers. HIO-201 dumps Jurai is a chunibyo who is stuck in that way of thinking though others try to cure him of it. Tomoyo is an undercover chunibyo and is always on Jurai’s case. Hatoko is a pink haired airhead who is comedic fodder but she’s sweet and caring which kind of makes up for her lack of common sense. You have Sayumi who is your smart, tsundere elder classman and little Chifuyu who’s just your cute little kid who hangs out with them and also has powers too. Together they make a good group, separate they might be a bit much to take.

This one is made by Trigger, that’s why there’s a scene with Mako from Kill la Kill. She’s in the background, not an actual character with a role. If you don’t pay attention to detail then you’ll miss her. 600-199 dumps I might have to start paying closer attention to other Trigger shows for things like that because this is the 2nd time I watched the show and saw her, didn’t the 1st time.

The show seemed like it could have went somewhere but they didn’t do much with it. There weren’t many battles or anything like that. It’s more about their relationships with each other. Now when you have superpowers, you expect more than that. It did have an ending to it but some events left you wanting more like the few battles that took place and other references but it doesn’t look like there will be a season 2 since the light novel seems to have ended.

Put it on if you’re bored and need something to watch but don’t go running to check it out, you’ll be disappointed.