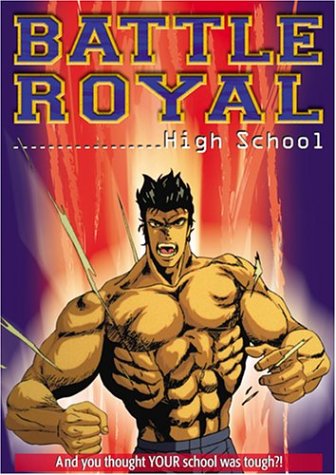 I wanted an OVA one day and the name Battle Royal High School stood out. If you were looking through names, you know it would have got your attention too, don’t lie.

This show is about Hyoudo Riki who is just an ordinary guy, as ordinary as you can be if you participate in Kung Fu matches wearing a tiger mask. He’s one of the top students at his school so it’s not like someone can say something to him about it. But one day Riki meets his own doppleganger Byoudo, the master of the Dark Realm and when a dimensional rift opens, an evil Fairy Master tricks Byoudo into making an attempt to conquer Earth.

So now Riki is possessed by his doppleganger who is the complete opposite of him, while the minions of the Fairy Master are now mutating Riki’s classmates. All the while, a Space Time cop named Zankan is coming to try to exorcise or kill Byoudo/Riki and others who have been mutated.

It’s an old show so don’t expect much in terms of art or anything. The music is also subpar. Even at the time it was out, this show would probably barely be passable. I never read the books but reviews seem to say they rushed the show and skipped major parts and it does feel rushed for sure.

I think someone forgot to tell them that shows usually have endings. The way they ended this seemed like someone cut the film too short. This one is just not one to go out of your way for. If you have 45-50 minutes to burn then go ahead but I already gave you my warning. It’s not very good at all.