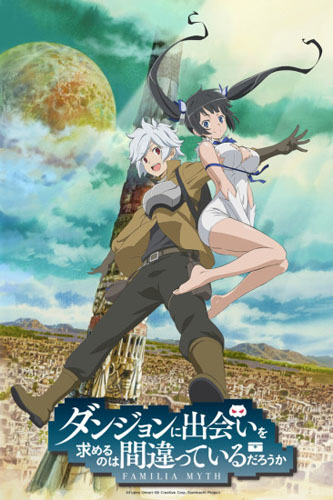 I still don’t know if it’s wrong to pick up girls in a dungeon but at least I got to enjoy trying to find out. When I first saw the name like a year before the show came out, I was already interested in knowing more. I could have went and got the manga but I’m a more visual person.

Believe it or not, the show is NOT about Hestia and the blue boob ribbon. That really took the whole internet by storm didn’t it. Once the show hit, it was all Hestia, all the time. She was trending on Twitter, all over search engines, it was crazy.

The show is actually about Bell Cranel, the white haired kid in the pic for those who don’t even know that he has a name. Bell is an adventurer and Hestia is his “goddess”, the leader of his “family”. They’re a family of two, it’s just him and her trying to get by. He’s just starting out so he doesn’t have strong weapons, skills or anything else yet. In one of his first missions, he meets Aiz the Sword Princess and he becomes determined to be strong enough to be with her. That’s where the adventure truly begins.

The characters really make the show here. The action is okay but it’s the characters. Bell ends up being your clueless teenage boy but it somewhat works since the females in his life actually interact. Hestia is a yandere who is very possessive of Bell and her interactions with the other females are pretty funny, especially when they find out she has a date and her and Bell end up in what looks like a run for their lives. He forms a party with a thief and a fallen weapon maker, the thief ends up in a rivalry with Hestia though Bell doesn’t realize it or he’s too busy swooning over the Sword Princess at the time. Almost all of the characters leave some type of impression.

I couldn’t find fault with anything in this show, except maybe the ending but that could be because I was looking for more. It was an ending but one that felt so incomplete, not going to go into detail but it just didn’t feel like a true ending because they left you with a ton of unanswered questions. I really hate the 12 episode thing, how can you consider that a full season. Sure most anime is based on manga and they’re trying to sell more books but why not try to sell commercials and whatever else associated with the product too?  If a show is good enough, people will go see a movie or buy figures and all that stuff. Production committees, I’m talking directly to you.

This one is going in my 5 star reviews, no doubt about it. If someone wanted a recommendation from this past spring season, this would be it. I hope there’s more coming because it felt like it was ended way too early. At least one more 12 episode cour, if not more because I still don’t know if it’s wrong to pick up a girl in a dungeon. Technically there are enough light novels out to do it but it might lead to a disjointed season since the rest of the novels tell backstories. If they want to ride the hot hand, they’ll have to deviate from the novels a bit. But people will be waiting nonetheless.
[yasr_overall_rating]